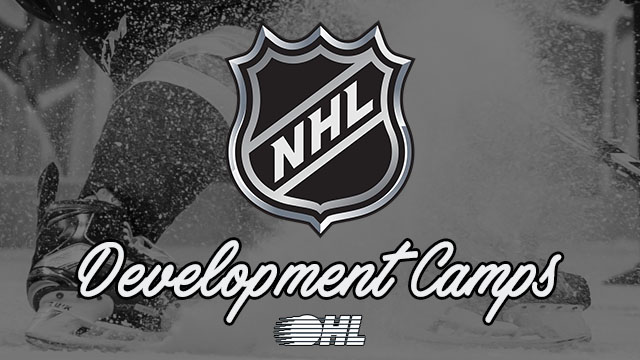 The 2018 NHL Draft is officially in the books and NHL clubs are getting a look at some of their newest prospects as Development Camps get underway this week.

Members of the 2018 draft class as well as returning prospects visit their respective NHL cities for a time of on and off-ice development both at the rink and in the community.

Here’s a look at OHL players attending NHL Development Camps throughout the course of the month and a glimpse at what they’ve been up to at and away from the rink.

“It’s really just the tip of the iceberg, getting drafted. I feel it’s just the start of an opportunity to achieve your real dream.” – Barrett Hayton

What else is in store at #CBJ Dev Camp?https://t.co/Rbfm73zece

“The effort you put in here is going to decide how quick you make it to the NHL.” Jim Nill speaks to Dallas Stars prospects on the first day of Development Camp. pic.twitter.com/bLLXy4uKCR

“He’s a great friend of mine & I’m just looking forward to it a lot.” #Oilers picks @ryan10mcleod & @EvanBouchard02 will go from @OHLHockey foes to camp compadres thanks to this weekend’s #NHLDraft. https://t.co/WgzfcOEKJW

“Putting on the jersey for the first practice was really cool.” Newly-drafted @EvanBouchard02 talks about his first day at #Oilers Development Camp pic.twitter.com/I8LifInKvR

“I’m just going to take in everything I can & talk to as many people as I can.” #Oilers 40th overall selection at the 2018 #NHLDraft @ryan10mcleod on attending his first Development Camp pic.twitter.com/BV9xfllu8e

“Couldn’t have asked for a better spot than New York.” — 2018 #NYR draft pick Joey Keane talks about when he heard he’d be coming to New York and what type of defenseman he is at #NYRPDC. pic.twitter.com/NyJSyShc71

The boys are serving more than 1000 meals to those less fortunate today with Catholic Charities of Southern Nevada ? pic.twitter.com/Amalpz77Pk