OHL ‘On the Run’ Player of the Week: Boris Katchouk 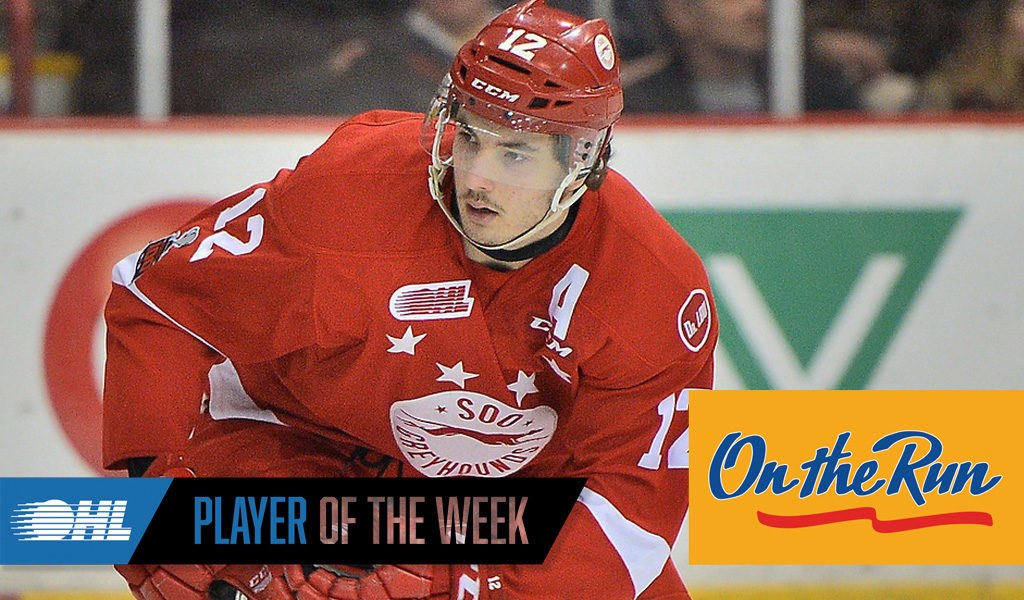 Toronto, ON – The Ontario Hockey League today announced that Tampa Bay Lightning prospect Boris Katchouk of the Sault Ste. Marie Greyhounds is the OHL ‘On the Run’ Player of the Week for the playoff week ending April 22 after scoring five goals and three assists for eight points in three games with a plus-minus rating of plus-8.

Katchouk’s performance last week helped the Greyhounds eliminate the Owen Sound Attack in second round playoff action and take a 2-0 series lead against the Kitchener Rangers in the Western Conference Championship Series.  In a wild Game 7 against the Attack last Tuesday, Katchouk stepped up with the best game of his post-season career scoring his second hat-trick of the playoffs and adding an assist as first star of a 9-7 win on home ice.  The West Final opened on Friday night with Katchouk contributing an assist in a thrilling 3-2 victory, then earned first star honours in Game 2 on Saturday with two goals and an assist as part of the 4-2 triumph over the Rangers.  Katchouk and the Greyhounds continue their Western Conference battle for the Wayne Gretzky Trophy with Game 3 on Monday night in Kitchener followed by Game 4 on Wednesday.

Watch video highlights of Katchouk and the Greyhounds against the Attack in Game 7, and the Rangers in Game 1 and Game 2.

Also considered for the award this week was fellow Greyhound and Lightning prospect Taylor Raddysh who scored twice with six assists for eight points in three games, and St. Louis Blues prospect Robert Thomas of the Hamilton Bulldogs who scored once with six assists for seven points in three games of the Eastern Conference Championship Series against the Kingston Frontenacs.  In goal, Detroit Red Wings prospect Kaden Fulcher of the Bulldogs posted a 3-0 record against Kingston making 75 saves for a goals-against-average of 1.33 and save percentage of .949.