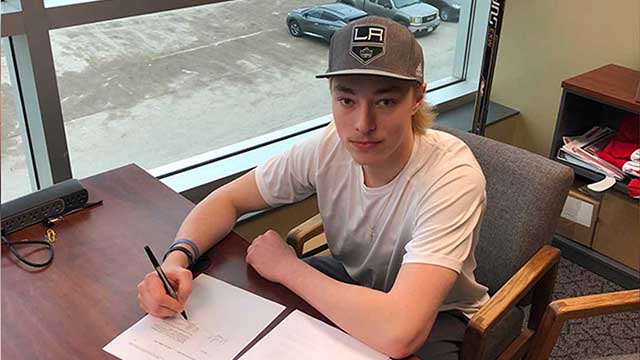 Courtesy of the Los Angeles Kings

He led the OHL in wins and goals-against average, ranked tied for third in shutouts, and ranked 11th in save percentage.

He is currently in the middle of the Western Conference Final with the Greyhounds, where they are tied 2-2, heading into Game 5 tonight.

He has started all 15 games during the postseason, posting a 10-4 record, .893 save percentage, 3.24 goals-against average and one shutout.

A third-round (72nd overall) selection of the Kings at the 2017 NHL Draft, Villalta has appeared 82 career regular-season games in the Ontario Hockey League, all with Sault Ste. Marie.

In his two seasons with the Greyhounds, Villalta has posted a 65-8-2-2 record, .912 save percentage, 2.52 goals-against average and four shutouts.