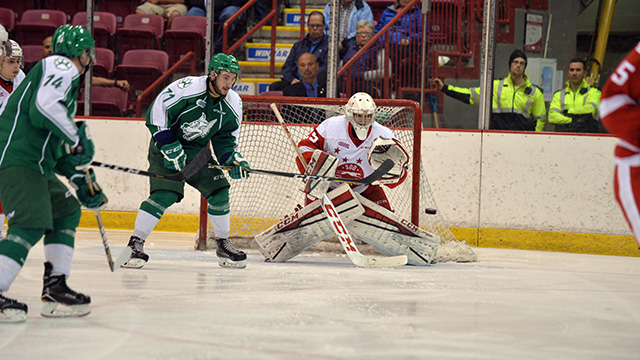 A stretch of four consecutive goals was ultimately the difference for the Soo Greyhounds on Friday night against the Sudbury Wolves.

With the game tied at two late in the opening period, Sudbury’s Dawson Baker scored with 9.1 seconds to go in the frame and it triggered four consecutive goals by the Wolves, giving the home team a 6-2 lead at the time.

“Playing five young defencemen, they looked tired out there,” said Greyhounds Coach Drew Bannister of the Wolves offensive outburst. “It caught up to us and it didn’t seem we have a lot of energy. A lot of the pucks weren’t moving as quickly as we needed them to.”

“Those are mistakes that are fixable,” Bannister added.

The Greyhounds would score three times to make the game close but couldn’t find the equalizer in a 6-5 Ontario Hockey League loss in exhibition action at the Sudbury Community Arena.

“Compared to two weeks ago (against Saginaw), I saw a lot of improvements in our game,” Bannister said. “Especially our young forwards, they did a lot of good thing and created some good offensive opportunities.”

Bannister would also say he “liked the way we came out in the third. There was way more pace to our game and we executed a lot of things.”