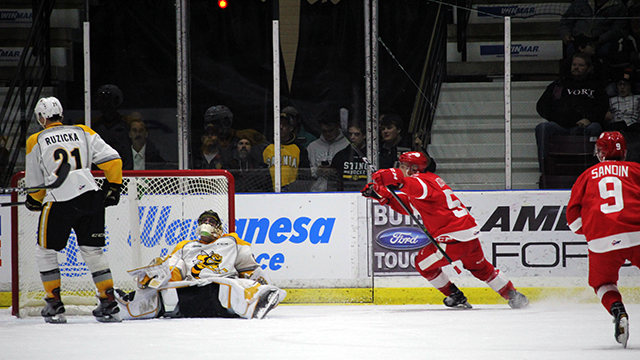 It was Jack Kopacka’s turn to be a hero on Friday night.

The veteran Soo Greyhounds forward slipped a backhand past Sarnia Sting netminder Justin Fazio to give the Greyhounds a 4-3 overtime victory at Progressive Auto Sales Arena in Sarnia in Ontario Hockey League action.

Kopacka after carrying the puck into the Sarnia zone and losing control momentarily, Kopacka regained the puck, cut through the slot and beat Fazio from the right side of the slot to give the Greyhounds the win.

“Their two guys closed on me and somehow I didn’t get hit, their defencemen hesitated to come and get the puck, I just saw some open space and then just shot the puck,” Kopacka said.

“The defenceman wasn’t really backing up, so I went to my back hand. I knew where I was shooting it. I knew where I wanted to put it,” Kopacka added of the winner, which beat Fazio to the blocker side off the post and in.

Morgan Frost chipped in with a pair of goals for the Greyhounds. Frost’s first goal came in the final seconds of the opening period with the Greyhounds shorthanded.

“It was important, especially late in the period,” Frost said. “It helped carry momentum into the second period.”

“It was a big goal,” said Greyhounds Coach Drew Bannister. “Boris (Katchouk) attacked the forward and Frosty was able to find some space. Boris made a great play to the back-door to him.”

Barrett Hayton also had a goal in the win.

Bannister was pleased with the effort throughout the contest.

“From start to finish, we didn’t really have any lapses in our game,” Bannister said. “Overall, we played really well. From our goaltending, our back end and our forwards all performed really well.”