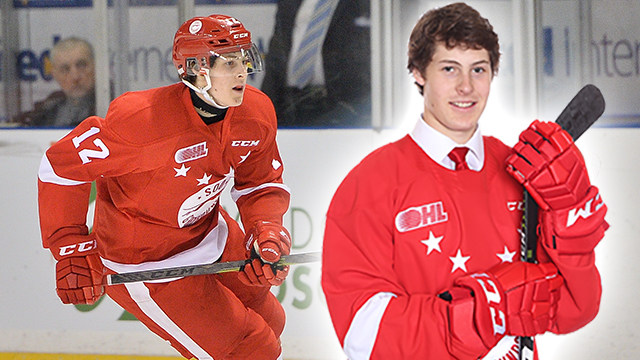 OHL action shifted to a neutral site game for the Soo Greyhounds on Thursday Night when they faced off against the Sarnia Sting in Chatham, ON.

Just over seventeen hundred fans (1710) at the Chatham Memorial Arena saw the Northern club take a first period lead and never look back while improving their pre-season record to 2-0, both coming on opposition ice.

MARC BOUDREAU (3rd Round, 2019) scored his first of exhibition play beating Cameron Lamour from deep in the right face-off circle to open the scoring just 3:44 into the first period.

Just past the midway point of the period, JAROMIR PYTLIK made it 2-0 Hounds with a powerplay tally from a similar location at 10:42, with assists to RYAN O’ROURKE and ZACK TROTT.

The Hounds held a slight 9-6 shot advantage in the opening twenty minutes, while Sarnia ended with a 27-26 advantage overall.

After nearly a scoreless second period, the two sides would trade off goals in the final two minutes of play.

The Sting cut the Soo lead in half with a penalty shot awarded at 18:08 when Marek Berka would beat ETHAN TAYLOR, for a 2-1 game.

Less than a minute later, JADEN PECA connected the Hounds second powerplay goal of the night, setup by RORY KERINS and TYE KARTYE to take a 3-1 lead into the dressing room after forty minutes.

For the second time on the night, Sarnia would be awarded a penalty shot, this time at 9:41 of the third period.
There Jacob Perreault brought the Sting back within a goal, now in a 3-2 game.

TYE KARTYE capped off his three point performance by connecting less than a minute later (10:32) before a late goal (17:43) by JADEN PECA for the 5-2 Greyhounds victory.

UP NEXT;
The Hounds will cap off the pre-season with their lone home exhibition game this coming Sunday, September 15 versus the Sudbury Wolves.
Game time is 2:07 at the GFL Memorial Gardens.