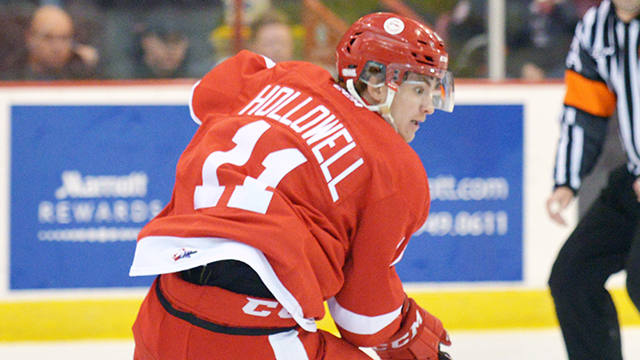 It was a first for Soo Greyhounds defenceman Mac Hollowell and it came at a great time.

Hollowell scored a natural hat trick on Sunday afternoon as the Greyhounds beat the Oshawa Generals 3-2 in overtime at the Tribute Communities Centre in Oshawa in Ontario Hockey League action.

In the extra frame, Hollowell broke away from the left side boards and took a nice feed from Morgan Frost through traffic and proceeded to slip the puck past Oshawa goaltender Kyle Keyser under his blocker arm 2:30 into overtime.

“Frost had the puck near the goal line and I just tried to beat my man to the net, and he made a nice pass,” Hollowell said.

It marks Hollowell’s first OHL hat trick and gives the overage blueliner 19 goals and 58 points through 46 games, both tops in the league.

“It feels great,” Hollowell said of the trick.

Hollowell has set career highs in both goals and points this season and is on pace to set a career high in assists as well.

UP NEXT;
The Greyhounds will be on home ice at the GFL Memorial Gardens this coming week for a trio of games.

Action kicks off on Wednesday, February 6th with the latest encounter in the Bell Challenge Cup against the Sudbury Wolves at 7:07 PM.

Saturday Night, February 9th – the Niagara IceDogs make their one and only regular season visit to Sault Ste. Marie at 7:07 PM.

While on Sunday afternoon, February 10th the London Knights make their first visit to town at 2:07 PM.

Tickets for all three of these games, and all regular season home games can be purchased by visiting the GFL Memorial Gardens Box Office during regular business hours of 10 AM to 5 PM Monday to Friday, 10 AM to 2 PM on Saturday and 10 AM through game time on game days, online at www.gflgardens.ca or by phone at 1.866.775.9422.