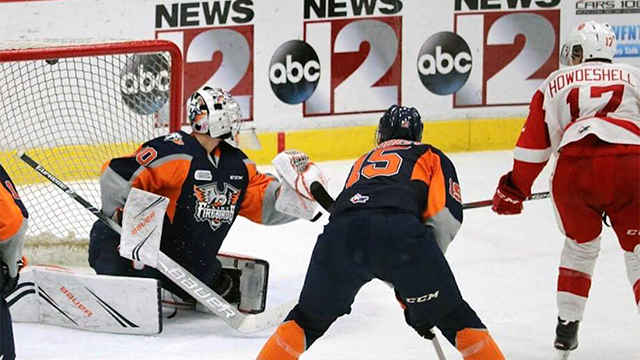 What is potentially the hottest stretch of his Ontario Hockey League career, Keeghan Howdeshell continued to roll along on Sunday.

The overage forward scored three times on Sunday afternoon, including a shorthanded goal marker in the final minute of the second period, as the Soo Greyhounds skated to a 5-3 Ontario Hockey League win over the Flint Firebirds at the Dort Federal Event Center in Flint.

“(Jacob) LeGuerrier made a huge pass to (Morgan) Frost and Frost did his thing and put the puck in a spot for me and I went in, backhanded it and it went in,” Howdeshell said.

“It definitely was a momentum change,” Howdeshell said of the goal.

“Shorthanded goals can really pick your bench up and deflate the other bench,” said Greyhounds Coach John Dean. “It was such a pretty goal too. He put the team on his back again. When he’s got the puck, he’s pretty hard to stop.”

“Back-to-back hattricks is a pretty impressive feat,” Dean said. “He’s also a kid that, when challenged and pushed to be his best, rises to the occasion.”

Dean added that Howdeshell is well-liked by the coaching staff as well.