Howdeshell comes through for Greyhounds, again 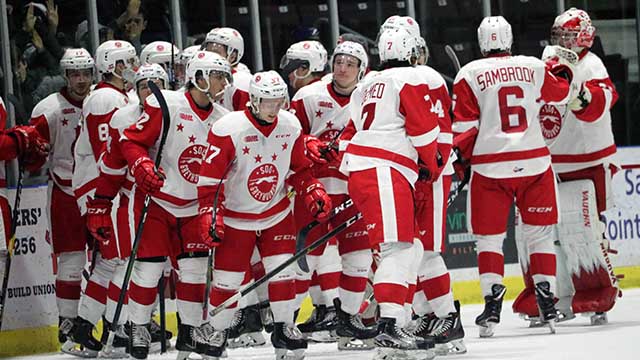 In the midst of a battle for top spot divisionally, the Greyhounds scored twice in the final eight minutes of regulation time before Keeghan Howdeshell scored just under three minutes into overtime to beat the Sarnia Sting 5-4 at Progressive Auto Sales Arena in Sarnia on Thursday night.

“We have some pretty good swagger in that room and the guys really believe in themselves,” Greyhounds Coach John Dean said. “Down two in the third period, most teams would have shut it down right there but it’s pretty night.”

Tied at two through 40 minutes, Sarnia scored a pair of goals in the final period to take the lead, including a goal by defenceman Colton Kammerer to make it 4-2 with 8:17 to go in regulation time.

Roman Pucek would pull the Greyhounds to within one just 41 seconds after Kammerer’s goal.

Just over three minutes later, Joe Carroll would beat a Sarnia defenceman to the goal and slide the puck past Sting netminder Ethan Langevin to tie the game at four and force the extra frame and se the stage for Howdeshell’s game-winner.

The overage forward found himself in the left faceoff circle and beat Langevin glove side to give him 29 goals on the season and the Greyhounds the victory.

“It was a frustrating game for me,” Howdeshell said. “I couldn’t get any bounces and I hit some posts. I had a chance to put it on net and had my head down. I had a step (on the defenceman) I couldn’t beat him, but I had an angle on him.”

UP NEXT;
It will be a battle of the top teams in the OHL’s Western Conference TOMORROW (Friday) Night.
The Greyhounds skate into Budweiser Gardens against the London Knights for a 7:30 PM opening face-off.