Hounds weather Storm thanks to third period come back 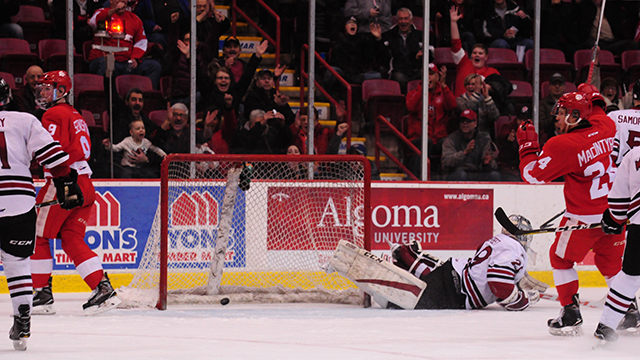 SAULT STE. MARIE, ON-
If twenty minutes can win you a hockey game, the Soo Greyhounds proved it on Friday Night.

Trailing 5-2 heading into the third period, the Hounds scored five unanswered goals to come back against the Guelph Storm and extend their current winning streak to three games.

It was a rough start for the Greyhounds and it put them behind the eight-ball early on.
Before the first period was ten minutes old, the visiting Storm scored three times in a span of 1:26 to take a 3-0 lead on the Hounds.

Less than a minute later James McEwan put Guelph up 2-0 after a turnover ended up seeing Garrett McFadden score from the top of the circle, notching his 11th goal of the year, and putting the Storm in command of the game (3-0).

That third goal ended the night for RAAYMAKERS, after allowing three goals on the first five shots of the game and he was replaced by MATTHEW VILLALTA who would go the rest of the way.

“It’s tough for a coach to see a goalie struggle that wants to do well for his team, and that early.  Never a good time to take a goalie out, but I think it’s a little easier because it happened so quickly for Matthew to kind of get in and set because it was quickly after warm-up” began Hounds Head Coach Drew Bannister.

“I feel for Joseph.  He’s a big part of our team, he’s a great kid, he’s struggling with his game right now.  He’s struggling finding it.  We have to be able to support him and try and get him back to where he needs to be for us” he continued.

Bannister would go on to explain that the change between the pipes was two-fold as the team was struggling as evident by their sixteen (16) first period turnovers.

“We had 16 turnovers in the first period.  Early on I think Raay was struggling.  One to send a message to our guys and I don’t think it got through because nothing changed that much.  But we did settle in a bit” he said added about the change.

BORIS KATCHOUK would put the Hounds on the board with their seventh shot of the game.
A behind the back pass by JACK KOPACKA went out front to KATCHOUK who notched his 25th goal of the year and the Hounds trailed 3-1 after twenty minutes.

Guelph would increase the lead early in the second period when Hounds were caught standing in front.  Just 1:21 into the period, Matt Hotchkiss put the puck home from in front for a 4-1 Storm lead.

The two teams would then trade goals before the second period was halfway through.
JACK KOPACKA let a right point shot go that was redirected in front cutting into Guelph’s lead, now 4-2, before James McEwan scored his second of the game at 7:48 converting on a 2-on-1.

Entering the third period of play, the Hounds were 3-8-0-0 when trailing after forty minutes.
But on Friday Night you would cue the comeback.

Just over a minute into the third period COLTON WHITE stepped off the wall and scored his 5th goal of the season making it a two-goal game (3-5).

Three minutes later (4:34) BARRETT HAYTON shot around a Storm defenceman and beat Liam Herbst for his 6th goal of the year to pull the Hounds within a goal.

Guelph would call a timeout after the Hounds fourth goal, but it didn’t stop the surge of the hometown team.

BLAKE SPEERS put the Hounds on even terms (5-5) at 11:36 with his 8th goal of the year and then less than a minute later they would take their first lead of the night.
ZACH SENYSHYN got his stick on a MORGAN FROST shot to the net and redirected it past Herbst for his 32nd goal of the year, and a 6-5 Greyhound lead.

The empty net goal came at 19:32 whenb scored his 2nd goal of the night, assited by BORIS KATCHOUK and BOBBY MACINTYRE, to provide the Hounds a 7-5 victory.

The forward trio of SPEERS, KOPACKA and KATCHOUK combined for 7 points on the night, 4 goals and 3 assists in helping pace the Hounds.

Along with outshooting Guelph 41-27 in the game, the Hounds doubled their opposition 20 to 10 in the third period alone.

“I thought the third period we were excellent.  Once we scored that third goal to make it 5-3 you could see a little bit of panic set in, things change real quickly in that game.  Very similar to that North Bay game, but we had a lot more time.  I thought we did a lot of things, for whatever reason, we weren’t getting the breaks in the game, obviously some goals went in we didn’t like” said Bannister.

“The easiest thing in a game like that is to get away from what you do, and I thought for the most part the guys stuck with it.  The first period wasn’t pretty but there was still a lot of hockey to be played and the guys obviously fought there way back into it.  That’s going to be an important game for us moving forward” he concluded.

UP NEXT;
TOMORROW NIGHT (Saturday, February 11) the Hounds host their 3rd Annual “Hockey Fights Cancer” event when they host the Flint Firebirds.

Game time is 7:07 PM and is proudly presented by the Northside Auto Group.

A blind jersey auction, chuck-a-puck and “buckets of love” pass-the-bucket will go to supporting ARCH along with the Canadian Cancer Society’s Wheels of Hope Program.

Great seats are available by visiting the Essar Centre Box Office starting at 10 AM, ordering online at www.essarcentre.ca or by phone at 1.866.775.9422.