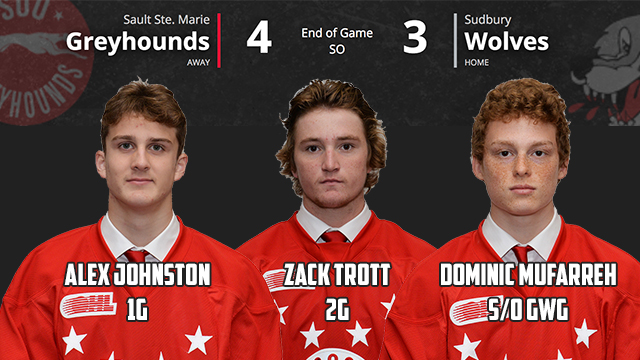 Over a week since the Soo Greyhounds completed their training camp, the defending Western Conference Champions finally got to open their pre-season play on Thursday.
The Hounds travelled East to Sudbury to take on the Wolves with eight rookies in the line-up and would pick up a 4-3 shootout victory.

After Eric Eschweiler pulled Sudbury even just before the midway point of the second, Quinton Byfield gave the Wolves the lead just under five minutes later.

That lead that lasted until the final minute when the Hounds ALEX JOHNSTON (6th Round, 2017) with forty-nine seconds to go in the period, netted the tying goal on the powerplay.
Brett Jacklin and Rory Kerins provided the helpers.

The Northern Ontario rivals headed into the dressing room tied 2-2 after two periods of play.

Sudbury’s Anthony Tabak countered with lone powerplay goal of the game just past the midway point as the teams then skated the rest of the way scoreless, forcing a shootout.

With each team sitting with a goal in the shootout, it came to the fifth round when DOMINIC MUFARREH (7th Round, 2018) notched the game-winner for the Hounds.

These same two teams complete the pre-season when they square off at GFL Memorial Gardens this coming Sunday, September 16.
Game time is 7:07 PM.

Tickets are available by visiting the SK Group Box Office (inside the Gardens), by visiting www.gflgardens.ca or by phone at 1.866.775.9422.