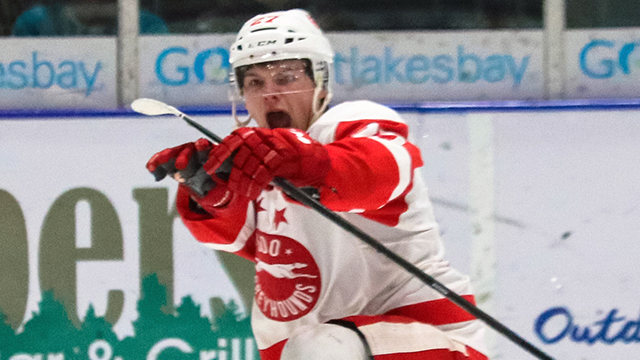 They may have lost the war, but the Soo Greyhounds won the battle on Thursday.

Barrett Hayton, playing in his first game since Feb. 19, scored at 2:22 of overtime as the Hounds edged the Saginaw Spirit 2-1 in a hard-fought, tight-checking clash before 4,687 at Dow Event Center.

Despite the victory, the point gained by the Spirit (45-15-3-3) is enough for Saginaw to clinch the OHL West Division title, its first division crown since 2011.

With 96 points, the Spirit is four points ahead of the Soo (42-16-7-1), with both teams having two regular season games remaining.

However, should the teams finish with the same number of points, the Spirit, which had a nine-game win streak snapped on Thursday, owns the tie-breaker.

“That was a pretty-gutsy effort by 20 guys,” said Hounds head coach John Dean, whose team played minus centre Morgan Frost (league-imposed suspension) and winger Keeghan Howdeshell (possible stomach virus). “That was everybody tugging on the same rope. That was the first time in a while it looked like all 20 guys had the same goal in mind.”

UP NEXT;
The Greyhounds wrap up the 2018-19 OHL regular season with a pair of games at the GFL Memorial Gardens this weekend.

Action resumes TOMORROW NIGHT (Fri. Mar 15) when the London Knights are in town for a 7:07 PM puck drop.

Then on Sunday afternoon – March 17 – 2:07 PM the Greyhounds square off for the second time in seventy-two hours against the Saginaw Spirit.

Tickets for both of these games are available now at the GFL Memorial Gardens Box Office, presented by SK Group, online at www.gflgardens.ca or by phone at 1.866.775.9422.

PLAYOFF TICKETS
Fans are reminded that general walk-up tickets for Home Games 1 & 2 of the opening round playoff series for the Greyhounds (opponent and dates TBA) are AVAILABLE NOW!