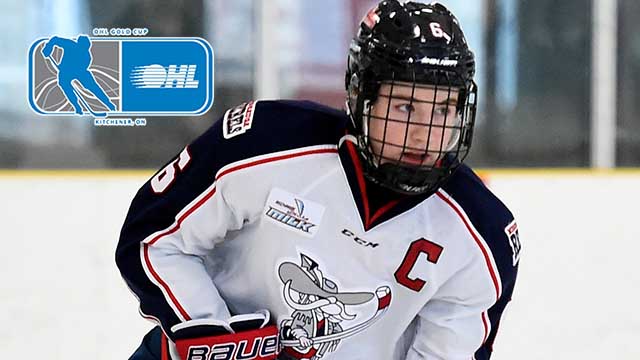 Five members of the 2018 draft class by the Soo Greyhounds were part of 160 players who took part in the OHL Gold Cup this past weekend in Kitchener, ON:  Matthew Halushak (HNO), Rory Kerins (shown) and Ryan O’Rourke (GTHL Red), Tyson Tomasini (HEO) and Kalvyn Watson (OMHA White).

Sunday marked the final day of competition and all five players were part of medal or consolation contests.

O’Rourke and Kerins were part of the Championship final where they and their GTHL Red teammates fell 8-2 to GTHL Blue.
Watson and his team OMHA White peers dropped a 7-3 contest in the Bronze medal game.

Halushak and Team HNO won 4-3 in a shootout in the consolation final while Tomasini and Team HEO claimed a consolation bronze with w win over Team NOHA.

ABOUT THE OHL GOLD CUP
The OHL Gold Cup is an annual showcase event featuring top under-16 talent in Ontario. As part of the Hockey Canada Program of Excellence, select players from the OHL Gold Cup will be invited to attend the National Under-17 Selection Camp, where they will have a chance to compete with other top talent from across Canada, to earn a spot at the World Under-17 Hockey Challenge.

This year the OHL Gold three off-ice education sessions, dedicated position-specific practices, and a full-team game-day skate. Additionally, the format of the tournament itself has been updated to feature three pool games and one crossover game on the final day. The OHL Gold Cup champion will be the winner of the A1 versus B1 crossover game.