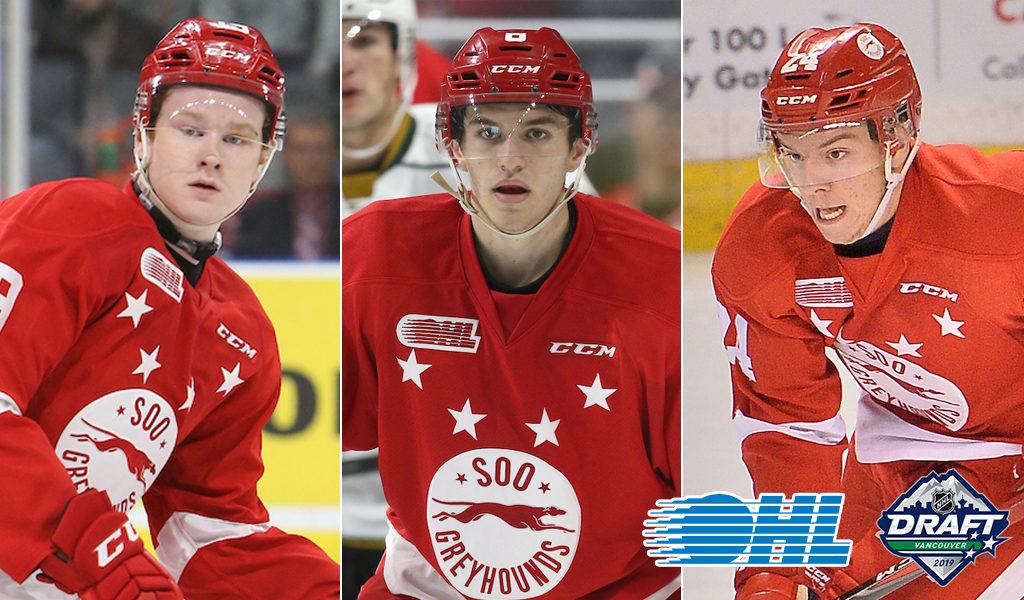 Another year, another 40+ win season, playoff round victory and a new crop of draft eligible talent in Sault Ste. Marie.

The Soo Greyhounds, despite their out-of-the-way geographical location on the OHL map, have found a way to become one of the League’s bastions of consistency in recent years, producing an NHL Draft selection in 12 consecutive seasons including a first round pick in five of the past six.

“There’s a lot of really neat aspects to my job,” said Hounds GM Kyle Raftis,” but my favourite is probably having the chance to meet the kids and their families when they first arrive in town and then fast forwarding a few years to the day where some of them are able to get drafted and sign an entry-level NHL contract. It’s very rewarding to be a part of the whole process and to see guys get rewarded for the hard work they put in.”

Nobody makes space like @_morganfrost_10.#BestOfOHL honours to the @NHLFlyers prospect and #OHL assist leader creating the lane for @leguerrierjacob who fires home his 5️⃣? in @OHLHoundPower win. pic.twitter.com/VRUKwuk7Nn

The Greyhounds program has produced six NHL Draft picks that have gone on to play at least 150 NHL contests in the past decade headlined by the likes of Pittsburgh Penguins goaltender and two-time Stanley Cup champion Matt Murray, former captain and Edmonton Oilers blueliner Darnell Nurse and homegrown undrafted free agent signing Colin Miller of the Vegas Golden Knights.

While the Hounds may not have produced another fifth overall pick in the mould of Barrett Hayton this year, they do feature three names that could potentially hear their names called this weekend in Vancouver.

Third-year defender Jacob LeGuerrier (92), second-year 27-goal scorer Cole MacKay (99) and sophomore centreman Joe Carroll (101) are all within 10 slots of each other on NHL Central Scouting’s Final Draft Rankings, with each bringing unique skills to the conversation.

A late 2000-born defender, LeGuerrier made the jump to the OHL as a 16-year-old in 2016-17 despite being one of the youngest players in his draft class. He helped the Hounds reach the OHL Championship Series last spring before returning to put up 16 points (6-10–16) in his third campaign.

“For as young as he is, he’s racked up a lot of OHL experience,” said Raftis of the 6-foot-3, 197Ib. defenceman. “He’s only 18 years-old and has already played 34 OHL playoff games which is another half-season of development that he’s benefitted from. We expect he’ll be a really big part of our blue line next season.”

Stepping it up in the second ?

Middle frame is all @9Cmackay scoring his first career ??? in span of 8:32 lifting @OHLHoundPower to win in battle of West’s best. pic.twitter.com/7LAKtd2QPI

After leading the ALLIANCE Minor Midget circuit in goal-scoring during the 2016-17 season, former fifth round pick MacKay battled injuries as a 16-year-old before climbing from five goals to 27 this past season. The 5-foot-11, 185Ib. winger has impressed coaches with his tireless work ethic and eagerness to improve his game.

“Seeing Cole score in Game 6 of the OHL Finals was pretty special,” said Raftis. “You don’t often see 16-year-olds contributing that way and since then his game has really taken off. His increased offensive production this past season didn’t come as much of a surprise to us given his intelligence and hard work.”

Carroll was the lone Greyhound to compete in the 2019 Sherwin-Williams CHL/NHL Top Prospects Game in Red Deer, Alta., giving the franchise a player in the annual showcase for a CHL record 10th straight year. The 6-foot-3, 195Ib. centreman came up big for the Hounds during their 2018 playoff run, filling in for injured overage pivot Hayden Verbeek. He recorded 31 points (9-22–31) over 65 games in 2018-19.

“It’s been unbelievable not just for me, but for a lot of young guys who have come through the Soo to be a part of a franchise that develops so many pros,” said Carroll of his experience as a Greyhound. “The job that management has done in bringing in good players and developing them for the next level speaks for itself and it’s been fun to play on competitive teams these past two seasons.”

? straight years at #SWTP:#NHLDraft prospect @joe_carroll19 made it a decade of consecutive representation for @OHLHoundPower setting an event record.

The Hounds continue to serve as a player pipeline, finding consistency both on the ice and at the NHL Draft even despite not picking in the second round of the OHL Priority Selection since 2014.

Raftis and his staff continue to work hard in both the identification and development of talent acquired through all 15 rounds of the OHL Priority Selection.

“I think it’s fifty-fifty in terms of drafting and development and how we go about working with our prospects even before they reach the OHL level,” Raftis noted. “Like anything though, with any player it’s always a mix of the work they’re willing to put in and the corresponding opportunity they are given.

“When their skill set can merge on top of that it really provides a good synergy for a player in terms of what they can show people they can do.”

Stay tuned to ontariohockeyleague.com to see if the Hounds will have a player selected at the NHL Draft for a 13th consecutive year this coming weekend in Vancouver.