Hounds pick things back up in Pennsylvania 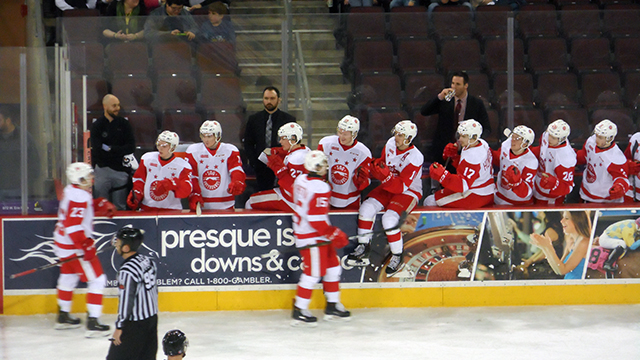 Story and photos by soogreyhounds.com

ERIE, PA-
Twenty-four hours after being held to a single goal as their road opened, the Soo Greyhounds erased those memories with their only visit to Erie.

Statistically near the .500 mark head-to-head against the Otters over the past five years, that trend would stay intact as tonight’s result would see the two teams would split their 2018-19 season series.

The first period saw the Hounds down a man just over a minute into play, but they worked the situation perfectly and didn’t allow Erie a shot on goal during the two minute span.

As a matter of fact, the Hounds kept the puck away from ETHAN TAYLOR for over five minutes to start the game.

Erie would go to their second man advantage just around the midway point, and while they put one off the crossbar were unable to capitalize and the Greyhounds were 2-for-2 on the penalty kill in the first period alone.

Scoring opened at 14:09 when the Hounds rushed in on a 2-on-1 and ALEX JOHNSTON who carried the puck wired a shot high past the glove of Daniel Murphy for his 7th goal of the season and a 1-0 lead.

Just over four minutes later, TYE KARYTE made the pass from one circle to the other to BARRETT HAYTON whose shot produced a rebound off the pads of Murphy and COLE MACKAY was quick to deposit the rebound to put the Hounds up to a pair through twenty minutes.

For the second straight period, the Hounds held Erie at bay and shotless in the opening five minutes of the second period before a sequence of plays brought the Otters within one.

At 5:24 the Greyhounds had a goal waved off due to incidental contact with the goaltender while less than a minute later (5:55), Brendan Sellan cut the Greyhounds lead by beating TAYLOR low to make it a 2-1 game.

Late in the penalty free period, the visiting Greyhounds would get an insurance marker when their leading-scorer MORGAN FROST put the puck off the end boards and it banked off the back of Murphy and in for a 3-1 lead, and Frost’s 32nd goal of the year.

In the third period, and before the halfway point, the Greyhounds would be assessed back-to-back minor penalties that led to a Erie 5-on-3 for a minute and twelve seconds.

Erie couldn’t capitalize as the Hounds went 4-for-4 on the PK on the night, and rearguard JACOB LEGUERRIER made major contributions during the span.

Quickly thereafter the Hounds had a man advantage of their own that saw Erie with a glorious chance when Alex Gritz went in on a brreakaway but was stopped by a big pad save by TAYLOR to keep the two goal cushion. 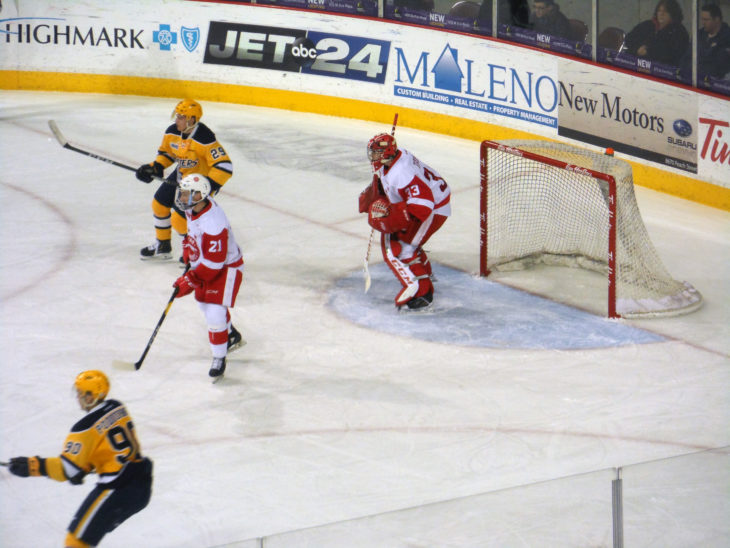 Scoring would end at 18:59 when BARRETT HAYTON slick hands worked himself from his own zone to Erie territory before depositing the puck into an empty net for his 19th goal of the season and a 4-1 Greyhounds victory.

The win improved the Hounds to 32-11-5-1 on the season, good for 68 points while keeping them four points ahead of the Saginaw Spirit at the the top of the West Division after they beat their I-75 rivals from Flint on the night.

UP NEXT;
The Greyhounds will return to Ontario on Saturday in preparation for their trip finale on Sunday, February 3rd when they visit the Tribute Communities Centre in Oshawa, ON against the Generals.

THIS WEEK AT GFL MEMORIAL GARDENS
The Greyhounds will be on home ice at the GFL Memorial Gardens this coming week for a trio of games.

Action kicks off on Wednesday, February 6th with the latest encounter in the Bell Challenge Cup against the Sudbury Wolves at 7:07 PM.

Saturday Night, February 9th – the Niagara IceDogs make their one and only regular season visit to Sault Ste. Marie at 7:07 PM.

While on Sunday afternoon, February 10th the London Knights make their first visit to town at 2:07 PM.

Tickets for all three of these games, and all regular season home games can be purchased by visiting the GFL Memorial Gardens Box Office during regular business hours of 10 AM to 5 PM Monday to Friday, 10 AM to 2 PM on Saturday and 10 AM through game time on game days, online at www.gflgardens.ca or by phone at 1.866.775.9422.