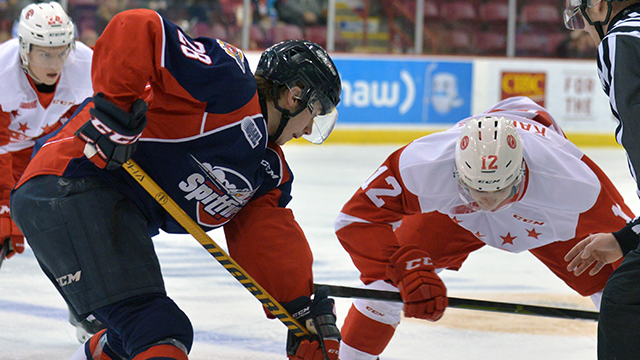 Story by Peter Ruicci (Sault Star)  |  Photo by James Egan’s Sports Photography
It was hardly a work of art.

But it was the Windsor Spitfires, buoyed by the netminding of Michael DiPietro, who found a way to win.

Jordan Frasca beat Matt Villalta through the five-hole to break a 2-2 tie as the Spitfires edged the Hounds 3-2 before 4,088 at the WFCU Centre.

The goal, at 5:49 of the third period, came after Grayson Ladd held the puck in along the boards.

Ladd fed Frasca, who was alone in the slot before notching his second goal of the game.

“I don’t know whether either coach would be excited,” said Dean, whose team lacked some spark. “It looked like nobody wanted it.”

The Hounds coach also talked about how his club wasn’t good enough in its own zone.

UP NEXT:
The Greyhounds will make Friday a practice and then travel day before moving into their second game of the trip on Saturday, December 1st against the Saginaw Spirit.
Game time is 7:05 PM from the Dow Event Center in Saginaw, MI.

Q&A with Nolan Dunn
16 hours ago