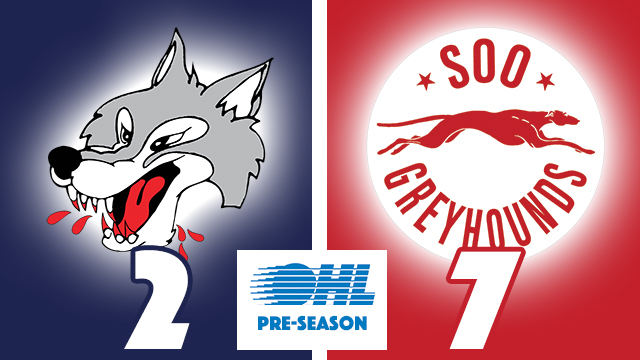 They faced a quick turnaround and did so minus six veterans from their line-up.
Less than twenty-four hours after concluding their 2019 Training Camp, the Soo Greyhounds made the trip east down Highway 17 to kick off their pre-season schedule in Sudbury against the Wolves.

A tick over a minute into the game (1:01) , JOE CARROLL notched his first of two goals on the night finishing off a play involving COLE MACKAY and TYE KARTYE to give the Greyhounds the 1-0 lead.
The lead increased to a pair when TANNER DICKINSON, a free agent signee in May, netted his 1st-career OHL pre-season tally at 18:02 for a 2-0 lead after twenty minutes.

Like he did in the first period, JOE CARROLL notched the opening goal of the middle frame when he scored the game-winning, shorthanded goal, at the 6:21 mark for the only goal in the period.

The Greyhounds lead sat at 3-0 after forty minutes.

Offense picked up in the third period with a combined six goals, four to the Hounds.

KALVYN WATSON made it a 4-0 game just under five minutes into the third period.

The Greyhounds rounded out their scoring by netting two more goals before the midway mark of the period when 2019 1st Round selection JACOB HOLMES tallied on the man advantage at 8:57 before TYE KARTYE lit the lamp less than half a minute later.

MacAuley Carson recorded Sudbury’s second goal of the night in the final minute, before the Greyhounds went on to kick-off their pre-season schedule with a 7-2 victory.

Netminder CHRISTIAN PROPP went the distance for the Hounds stopping 25 of 27 shots faced including shutting out the Wolves over the first forty-minutes.
Sudbury netminders Mitchell Weeks and David Bown each saw action on the night.

The Greyhounds went 2-for-11 on the powerplay, and a perfect 6-for-6 on the penalty kill.

The Greyhounds will now have nearly two weeks ‘off’ before they are next in action when they head to Chatham, ON on Thursday, September 12th for a neutral site game against the Sarnia Sting.
Puck drops at 6:30 PM.

This Week in Hounds History; 1993 Memorial Cup Championship
12 hours ago 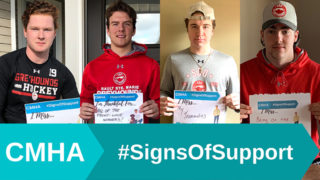