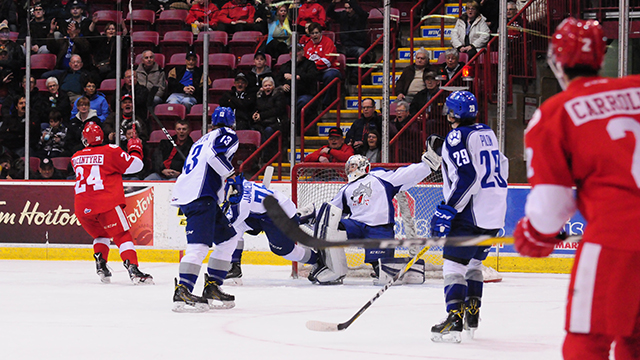 SAULT STE. MARIE, ON-
Along with putting up their highest shot output of the season, the Soo Greyhounds were rewarded on Wednesday with their fourth win in their last five games.

And while firing fifty-four (54) shots on the Sudbury duo of Jake McGrath (starter) and Mackenzie Savard, the Greyhounds erupted in the second period in paving their way to the win.

“Today was probably one of our better games we’ve had in the last couple weeks.  We were able to capitalize on the chances we had.  I thought we put a lot of pressure on their D (defence), and we were able to expose them and brings puck to the net.  I thought Matty made some good saves early on when we needed a couple poor decisions with the puck” began Greyhounds Head Coach Drew Bannister.

“Overall the game, second period especially, we controlled most of the game” he added.

The first period would be skated scoreless, but momentum may very well have been started around three minutes in when HAYDEN VERBEEK got wedged between a pair of Wolves leaving DAVID MILLER alone to test Jake McGrath.

The same trio remained on the ice for the Hounds and ALEX GRITZ quickly therafter made his way to the front of the net with an opportunity of his own.

Neither side would capitalize in the frame leaving goose eggs on the scorebord after twenty minutes. 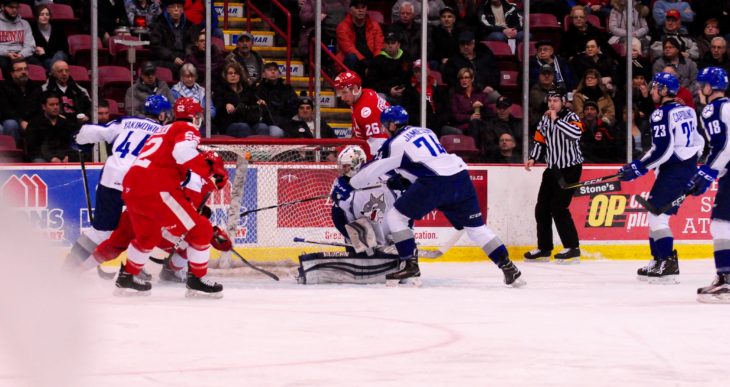 After moving through another ten minutes of scoreless hockey the Greyhounds got the ball rolling with a pair separated by just twenty-three seconds (0:23).
On the powerplay BARRETT HAYTON won the draw which saw the puck moved back to the point by MORGAN FROST.  There CONOR TIMMINS shot got through to the goal and ZACH SENYSHYN reached and placed it past the left outreached pad of McGrath for the 1-0 lead.
Then at 11:39, OTTO MAKINEN skated up the left wing and once reaching the goal line found an opening and fired home a shot over the right shoulder of the Sudbury netminder for the 2-0 lead.
For Makinen his was his 7th goal of the year, first since November 27th.

The lead was increased to 3-0 when HAYDEN VERBEEK circled the Sudbury goal and extended his reach before placing the puck to the net for a tip at the side of the goal by BOBBY MACINTYRE at 16:58.

Then in the dying seconds of the period, and while on the powerplay, BARRET HAYTON won another draw to the point and this time CONOR TIMMINS shot was redirected in front by SENYSHYN to provide the Hounds a 4-0 lead after two periods.
Hayton ended the night 4-for-6 in the face off circle.

The Hounds had outshot Sudbury 25-5 in the period, and held a 40-16 advantage through the forty minutes.

“A lot of the shots were quality shots too.  We weren’t shooting pucks from the perimeter.  I thought we were patient with the puck.  Our forwards did a real good job when they beat guys down low.  We challenged their D’s feet.  When we beat them down low we brought pucks to the net and made sure we had numbers going to the net” stated Bannister when asked post-game about his clubs 50+ shot performance.

Sudbury would change their starting netminder to start the third, as Mackenzie Savard replaced Jake McGrath who would end the night with 36 saves on 40 shots.

Just under three minutes in the lead became a 5-0 count when BLAKE SPEERS requested and received the puck as he crossed the Sudbury line.  The Hounds captain drove deeper in the zone and fired a low shot registering his 11th goal of the season.
BORIS KATCHOUK and ANTHONY DEMEO would pick up the assists.

Sudbury would break the shutout bid of MATTHEW VILLALTA on a bounce that would go their way.
While the visitors were on the powerplay, Dmitry Sokolov spun and fired the puck that would go off of the upper body of CHandler Yakimowicz to put the visitors on the board at 8:37.

The Wolves cut the Hounds lead to 5-2 when a scramble ensued off a draw and Macauley Carson fired home his 19th of the year at 11:47.

Just over a minute later (12:55) JACK KOPACKA scored his 23rd of the year converting on a breakaway before BLAKE SPEERS (14:35) pulled back his shot and then scored low for the second time of the night capping off the Hounds 7-2 victory.

“It was a good game.  Our goaltending was good when it needed to be.  Our offense was clicking tonight, I thought we did a lot of good things and had to work for the most part for our goals.  We defended well” began Bannister.

“Early on the opportunities they got were from careless turnovers but as the game went on we were a lot better” he concluded.

The win improved the Hounds to 38-14-2-1 on the season, good for 79 points and a five point cushion at the top of the West Division.
Windsor holds a game in a hand. 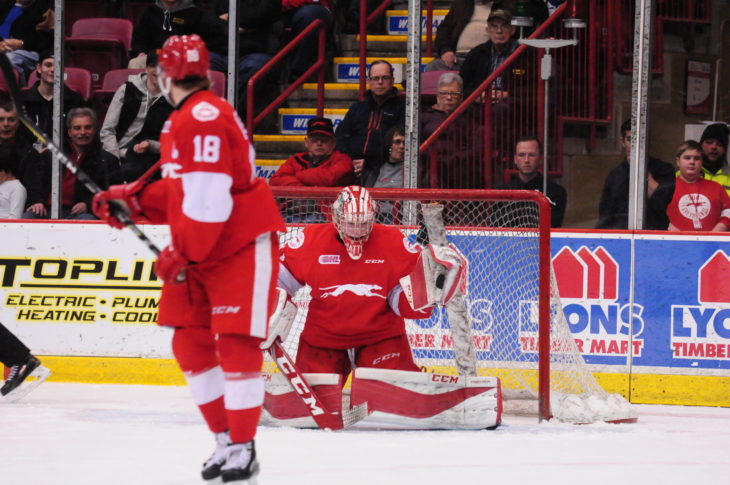 UP NEXT;
The Hounds will host the Kitchener Rangers for the first-time this season, this coming Friday, February 17th.

Game time is 7:07 PM and proudly presented by Boston Pizza.