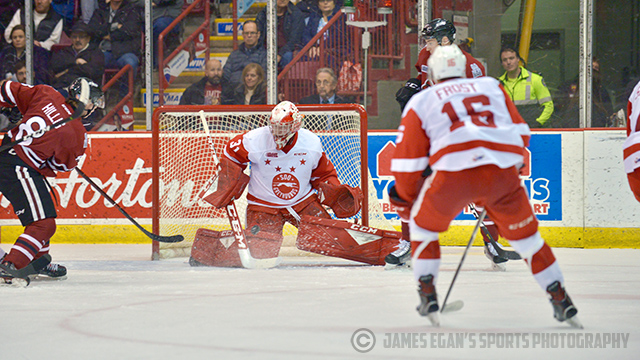 Some may have easily predicted the type of outcome that would be had Friday Night when the Soo Greyhounds and Guelph Storm met for the final time this regular season.

The two Western Conference opponents had played each other to overtime contests each of their three previous meetings this Ontario Hockey League season, with the home team winning.
And while on their 4th and final match-up would live up to expectations, the only change in the storyline would be that it would be decided in regulation time.

It was the Greyhounds who came fast out of the gates and put together an ideal start against the Storm.

After a near flawless penalty kill early in the first period, the home side would open the scoring and capitalize on their first powerplay of the game.
Fifteen seconds into the man advantage,  COLE MACKAY pounced on a rebound to the right of Anthony Popovich to open the scoring with his 11th goal of the season.

A mere six (0:06) seconds later, the lead increased to a pair of goals where the puck was misplayed by a Storm defender after the centre ice draw was won, and BRETT JACKLIN went in alone and notched his 1st goal of the season to make it a 2-0 game.

Just over two minutes later the Hounds took a 3-0 lead when a ALEX JOHNSTON took advantage of a Guelph turnover and roofed the puck into the goal for his 5th goal of the year.  JOE CARROLL and MAC HOLLOWELL both picked up their second assists of the night on the play.

That third goal spelled the end of the night for Storm starter Anthony Popovich, who would be replaced by Nico Daws who made 20 saves on 21 shots faced for Guelph the rest of the night.

The Greyhounds took the 3-0 lead into the dressing room after twenty minutes while outshooting the Storm by a 20 to 9 margin.

Guelph responded seconds (0:11) into the second period after outracing the Hounds to negate an icing call, the puck appeared to hit a Greyhounds defenceman and be quickly be found and fired by Barrett Kirwin past MATTHEW VILLALTA to cut the home lead to 3 to 1.

MORGAN FROST hit the iron on a powerplay later in the period, and then VILLALTA got a left pad on an Isaac Ratcliffe change on a Storm powerplay later, as the early goal was the lone marker of the second period and the Greyhounds took the 3-1 lead into the dressing room after forty minutes.

The third period saw the Storm push back in a big way and along with outshooting the Hounds 17 to 4, scored the only goals of the period.

At 7:33 Cam Hillis took advantage as the puck changed direction and while standing to the left of the goal, cut the visitor’s deficit in half.

Then at 13:57, while on the powerplay, Domenico Commisso one-timed a high shot home to bring the Storm within a goal.

Guelph would pull their goalie late in the period, and while KEEGHAN HOWDESHELL rung the puck off the post while vying for the empty net, regulation time would expire and the Greyhounds would split the season series with Guelph thanks to the 4-3 victory.

MATTHEW VILLALTA made 29 saves on 32 shots, including key saves on Cedric Ralph, as the Greyhounds improved their record to 19-7-4-1, good for 43 points and an eleven point advantage over Sarnia in the West Division.

UP NEXT:
The Greyhounds will play their final home game before the Christmas Break this Sunday afternoon, December 9th when they play host to the Barrie Colts.
Game time is 2:07 PM at the GFL Memorial Gardens.

Fans can purchase tickets by visiting the GFL Memorial Gardens Box Office, presented by SK Group, Saturday from 10 AM to 2 PM or Sunday 10 AM through game time, online at www.gflgardens.ca or by phone at 1.866.775.9422