Hounds get it done in overtime … again 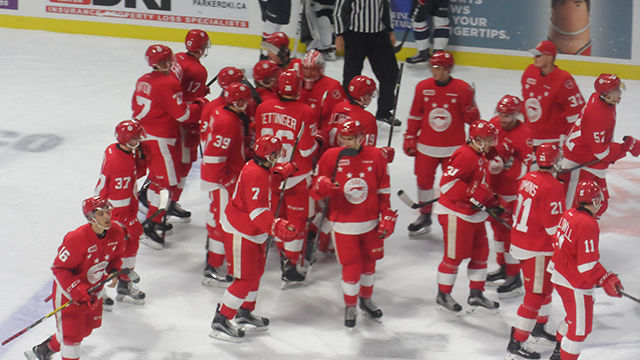 WINDSOR, ON-
They’re in the midst of a five-game roadtrip and coming into Thursday Night the Soo Greyhounds have went past the distance in each and every game.
Thursday Night against their division rivals, the Windsor Spitfires, the same kind of story would play out as an overtime goal would decide the outcome.

MATTHEW VILLALTA would start his 4th game of the season, and would be significantly tested just under five minutes into the first period.
Luke Kutkevicius was sprung in alone off the left wing and was turned aside.

Scoring opened five-on-five before the period was halfway through.
A turnover initially ended up with JACK KOPACKA who’s pass would be buried by BARRETT HAYTON for his 3rd goal of the year and a 1-0 lead for the visitors.

Shortly after a three-on-one between BORIS KATCHOUK, MORGAN FROST and HAYDEN FOWLER would end on the 1st-year Hounds stick last but his attempt at a two goal lead was turned aside by Michael DiPietro.

Windsor would pull even on the first powerplay of the game.
Aaron Luckuk fired from the top of the right circle and through a body and past VILLALTA for a 1-1 game.

The Hounds failed to take advantage of a late period powerplay and skated into the dressing room tied after one period.

The opening thirty seconds of the second period had the Spitfires buzzing and then three minutes in they would generate a quality chance when Luke Kutkevicius was alone to challenge Villalta for the second time in as many periods, but the Greyhounds keeper got the pads down and denied him.

Then the Greyhounds built a strong foundation for their second period shots with a sequence about five minutes in that equated six of seven shots of their own and two chances by KEEGHAN HOWDESHELL to put them ahead.

One the lone powerplay of the second period Windsor pounced on the puck behind the Greyhounds net at the 13:05 mark to register a go ahead, shorthanded tally.
MATTHEW VILLALTA came out to slow down a dumped in puck and his short, quick pass eluded CONOR TIMMINS as the duo went opposite directions as the puck was sent out front to Aaron Luchuk, for his second goal of the game and a 2-1 Windsor lead.

Four seconds after that same powerplay expired, BORIS KATCHOUK pulled the Hounds quickly back onto even terms wiring a shot from the circle to the right of DiPietro for his 5th goal of the year.
BARRETT HAYTON, with his 2nd point of the night, and TIM GETTINGER grabbed the assists.,

BORIS KATCHOUK broke in of the right wing alone and deked towards the left side of DiPietro with Austin McEneny drapped on his heels to no avail early in the third.

The Greyhounds held the Spitfires to a single shot on goal in the opening eleven minutes of the third period, but it was that single shot that provided Windsor their second lead of the night.
Mathew MacDougall netted his 2nd goal of the year as his wrist shot, while in stride, appeared to hit some iron and provided Windsor the 3-2 cushion.

The trio of BORIS KATCHOUK, TIM GETTINGER and HAYDEN VERBEEK worked a chance with 7:30 to go but were unable to capitalize at that very moment but all three would come up big later on.

After no less than four continuous icings by the home side, Windsor called a time out with 3:27 to as the Greyhounds pressure mounted.
The game tying goal came seconds later (16:49) when the Hounds kept the play in the zone a couple of times before BORIS KATCHOUK spun and fired home his 6th goal of the year and second of the night to tie the game 3-3.

Shots favoured the Soo 12-3 in the third period as the club went to overtime for the 4th consecutive game.

Less than two minutes into play in the extra session, HAYDEN VERBEEK came back hard to break up any step the Spitfires had on the Greyhounds for a potential break, and on the same sequence of play his team would reward him.
TIM GETTINGER took a pass from MAC HOLLOWELL and brought it up the right wing before firing a shot of the right post and home for the Thursday Night game-winner.

The victory improved the Greyhounds to 4-1-1-0, good for 9 points and first place in the West Division.  The Hounds have played one more game than the second place Sarnia Sting.

UP NEXT;
This quick two-game road trip concludes tomorrow evening – Friday, October 6th – for the Greyhounds with their first of two visits to Budweiser Gardens in London.
Game time against the Knights is set for 7:30 PM.