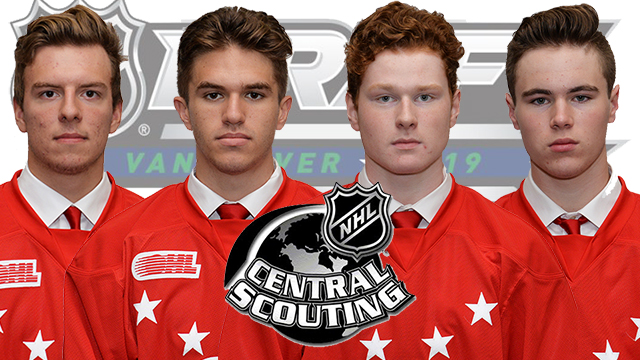 CARROLL (B-Prospect) is also in his second season with the Hounds.
Originally selected in the 4th Round of the 2017 OHL Priority Selection, Joe has 3 goals and 4 assists so far in the red and white.

LEGUERRIER (B-Prospect), a native of Gloucester ON is in his third season with the Greyhounds.
Originally selected in the 8th Round of the 2016 OHL Priority Selection, Jacob has appeared in all twenty-one games played by the Hounds so far this season while producing one of the team’s top +/- ratings with +5.

MACKAY (C-Prospect), a hometown product, is top 3 on team scoring while already surpassing his rookie season point totals from one year ago with 7 goals and 14 points in 21 games played.
He was selected in the 5th Round of the 2017 OHL Priority Selection with the Hounds.

MCLEAN (C-Prospect), the team’s 15th Round Selection in the 2017 OHL Priority Selection is in his rookie season with the Hounds.  Through 21 games played, the Brooklin ON product has 3 goals and 5 assists.

The foursome of Greyhounds are among forty-seven (47) players from the OHL listed this month in advance of the 2019 NHL Draft to be held in Vancouver, BC on June 21-22, 2019.

To view the complete release produced by the Ontario Hockey League CLICK HERE.

RELATED;
• Four players on the Greyhounds roster are already drafted into the National Hockey League with MATTHEW VILLALTA (LA, 3rd Round 2017), MAC HOLLOWELL (TOR, 4th Round 2018), MORGAN FROST (PHI, 1st Round 2017) and BARRETT HAYTON (AZ, 1st Round 2018)
• The Greyhounds lead all OHL clubs last month with 16 graduates on AHL opening day rosters
• Seventeen players have been drafted to the NHL out of the Greyhounds program over the past five years.  To view the full listing CLICK HERE.