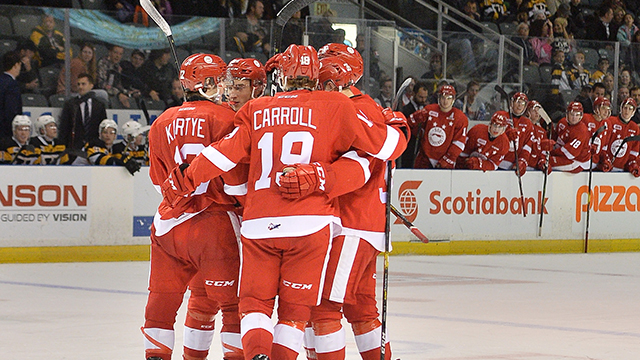 Story by Peter Ruicci (Sault Star)  |  Photo courtesy of OHL Images
The Soo Greyhounds numbers don’t just speak for themselves, they come right out and bark at you.

With a 19-8-4-1 record heading into their final two games before the Christmas break, the first half of the OHL season has been an outright success.

Only Ottawa, London, Sudbury and Niagara are producing points more effectively than the Soo’s .672.

And the Hounds have done that minus captain Barrett Hayton for 12 games and goalie Matt Villalta for six more.

Now, we knew this would still be a good team, despite the loss to graduation of Boris Katchouk, Tim Gettinger, Jack Kopacka, Taylor Raddysh, Conor Timmins, Hayden Verbeek and Noah Carroll.

To begin the season, Hayton, Villalta, Morgan Frost, Mac Hollowell and Jordan Sambrook provided this team with a star-studded nucleus.

And the emergence of Keeghan Howdeshell as a bona fide impact player has made the core group even more imposing.