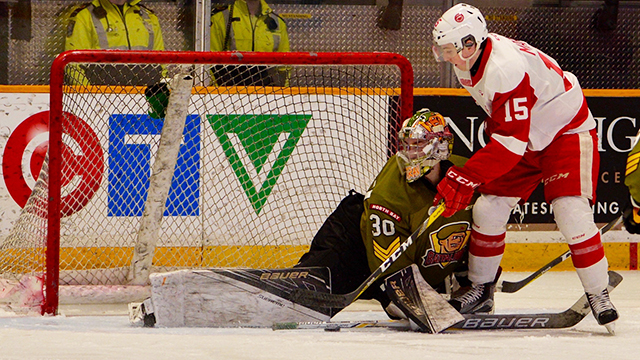 The final ten minutes were enormous for the Soo Greyhounds on Sunday.
Despite outshooting their opponent all game long it wasn’t until a pair of goals while skating 4-on-4 sparked five unanswered goals and a win in their final road game of the month.

It would be North Bay being the first to strike in the game, on the very first shift.
Just sixteen seconds into the game the puck came from the corner to MATTHEW VILLALTA’s left and to the top of the circle where a bullet by Brett Mckenzie for the 1-0 lead.

The Hounds bounced right back from that goal against to test Brent Moran.
Just over five minutes in, BLAKE SPEERS took the puck to the goal and CALVIN MARTIN couldn’t get a good handle in front.

HAYDEN VERBEEK started a play that put the puck to the net for DAVID MILLER although he couldn’t get much on the chance but the duo kept the puck in the zone and on the offensive and would be rewarded.
As the sequence carried on it eventually came around the net and to VERBEEK in front where he buried his 9th goal of the year for a 1-1 tie.
BARRETT HAYTON and DAVID MILLER picked up the assists.

Over the final ten minutes the teams would trade off powerplay opportunities, the latter which carried over for thirty-one (0:31) seconds into the second period for North Bay.

After North Bay’s early powerplay expired, the Battalion re-took the lead when Kyle Potts received a feed and snapped a shot through just fifty seconds (0:50) into the period, for a 2-1 lead.

ZACH SENYSHYN pulled the Hounds even for the second time just under two minutes later capitalizing on a North Bay turnover and burying from the right of the goal, with his 29th goal of the season.

A Greyhounds defenceman later got caught along the boards in a one-on-one battle, leaving an odd man situation deep where Steve Harland posted his 22nd of the year for a 3-2 lead after forty minutes.

North Bay increased their lead to 4-2 early in the third and the two sides skated that way until just over the midway point of the period.

Beginning at the 11:34 mark, the Hounds scored five unanswered goals in the period and stormed back to erase the two-goal deficit.
GUSTAV BOURAMMAN started a string of three goals in a span of 1:08 with a quick release shot that beat Moran.
Twenty-four seconds later (11:58)  BORIS KATCHOUK put home a rebound for his 24th goal of the season to tie the game.
Then at 12:42 ZACH SENYSHYN cut off the right wing and to the net before backhanding home his 30th goal of the season while providing the Hounds their first lead of the day, 5-4.

JACK KOPACKA scored the team’s first powerplay goal of the day to provide the insurance marker while BOBBY MACINTYRE capped off scoring with the empty net goal at 18:36.

The win improved the Hounds to 35-13-2-1, good for 73 points, while moving them 2 points ahead of Windsor for top spot in the West Division.

UP NEXT;
#TheHOMESTAND begins!  Eight straight games at the Essar Centre kicks off this coming Wednesday, February 8th when the Hounds host the Saginaw Spirit.
Game time is 7:07 PM presented by SSM Fire Services.

To purchase your February Family Pack visit the Essar Centre Box Office during regular business hours of 10 AM to 5:30 PM Monday to Friday, 10 AM to 2 PM on game days, or 10 AM through game time on game days.