Hounds close out 2017 with shootout triumph 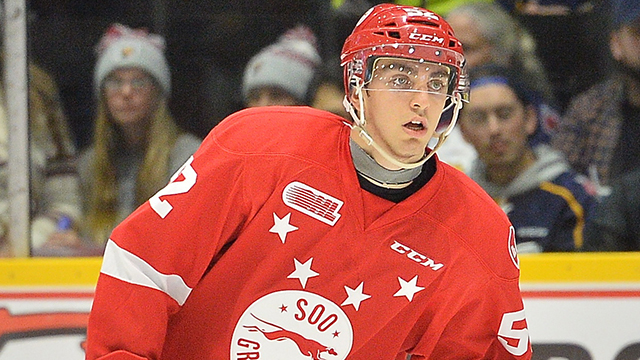 It was an exciting way to end the calendar year of 2017.

Facing a 3-2 deficit heading into the third period, the Soo Greyhounds responded quickly in the third period and would later prevail thanks to JACK KOPACKA’s lone shootout tally to clip the Guelph Storm 4-3.

The win came in front of a season-high and boisterous crowd of 4,568 inside the Essar Centre in Sault Ste. Marie.

“That’s our third game in three nights and they (Guelph) were sitting here rested and they competed hard.  I thought our first period was real good.  We did a lot of good things and we kind of controlled for the most part most of the first period” began Hounds Head Coach Drew Bannister in his post-game remarks.

“I thought we lost our legs in the second, you could kind of see we were a little bit tired.  The third period we came out and had a lot of jump.  We got into some penalty trouble and you could see it wearing on us a little bit.  In overtime we started to run out of gas” he continued.

And while the Greyhounds did face that challenging task of a 3-in-3 situation, they gave themselves a head start in the first period by scoring on the games’ only powerplay of the period.
At 8:26 of the first, Captain TIM GETTINGER had the puck to the right of the Storm’s Anthony Popovich and wristed the puck off the left post and past the netminder for the 1-0 lead.

That lead lasted until late in the frame when Isaac Ratcliffe used his long reach as the puck sat in tight on MATTHEW VILLALTA and put home his 17th goal of the year to pull the visitors even.

Then with 1:10 to play in the period, NOAH CARROL’s left point shot went wide of the Guelph net and came out the opposite side where MORGAN FROST quick shot would record him his 21st goal of the season and give the Hounds a 2-1 lead after twenty minutes.
For Frost, it was his first of two points on the night, and the team’s leading scorer would later exit the night as the OHL’s leading point man as well.

The fast-paced Western Conference battle carried over to the second period including glorious chances midway through the period where both netminders would shine.
First MATTHEW VILLALTA would turn aside Cam Hillis, while Anthony Popovich matched that task denying TIM GETTINGER quickly thereafter.

A double minor to the Storm’s Hillis would provide the Greyhounds an extended powerplay in the second half of the period but despite intense pressure of the Hounds the score would remain a single goal cushion initially largely due to the blocked shots by the Storm, notably Mark Shoemaker.

As that powerplay moved into the second half of the advantage the Hounds would get burnt by a turnover in the offensive zone that saw former Greyhound Liam Hawel lead a 2-on-1 up ice before feeding the puck to Givani Smith who put the Storm on even terms with his 6th goal of the season.

Back on even strength and fifteen seconds after successfully killing off the Greyhounds powerplay, Cam Hillis set up Isaac Ratcliffe at the side of the goal where he scored his second goal of the night and provided Guelph their first lead, 3-2 through forty minutes.

Seconds into the third period (0:28) the home side would bring the Soo fans to their feet.
MORGAN FROST won the draw back to NOAH CARROLL who’s point shot was redirected by BARRETT HAYTON high overtop Popovich to put the two teams in a 3-3 draw.

The Greyhounds would go on to kill off three powerplays throughout the period keeping things on even terms and both goaltenders would continue to shine.
The heroics no bigger than Anthony Popovich’s stop on JACK KOPACKA shorthanded as he stood alone in front of the goal before with 2:52 to go MATTHEW VILLALTA turned aside Nate Schnarr.

So to overtime would in the cards in this one, for the 10th time this season for the Hounds and ninth this year for Guelph.

With the Storm outshooting the Hounds 5-2 in the five-minute session, the teams continued to duel but then require a shootout.

There, the first shooter would be the lone successful one when JACK KOPACKA snapped his shot glove side on the Guelph goal to bring the roof off the Essar Centre figuratively, and the Hounds would celebrate their 23rd consecutive victory.

MATTHEW VILLALTA ended the game with 38 saves on 41 shots while his counterpart turned aside 39 shots on 42 faced in regulation,.

“The only significance right now with the way it is is we are separating in our division and conference and the league.  We are separating from teams, it’s hard to catch up to teams when you win 23 games in a row” said Bannister when asked about the significance of the team’s current win streak.

“What’s going to be significant, when we lose (which is probably going to happen at some point), is how we rebound” he concluded.

ON BEHALF OF THE SOO GREYHOUNDS OWNERSHIP, MANAGEMENT, COACHES, PLAYERS AND STAFF WE WOULD LIKE TO WISH OUR FANS AND CORPORATE PARTNERS A HAPPY NEW YEARS!

WE WISH EACH AND EVERYONE OF YOU ALL THE BEST IN 2018.

HAVE FUN AND BE SAFE WITH FAMILY AND FRIENDS AND WE LOOK FORWARD TO SEEING YOU ALL RINKSIDE IN THE NEW YEAR!

UP NEXT;
The Greyhounds start off the year 2018 with a three-game Eastern Ontario roadswing on Thursday, January 4th when they make their only visit to the Hershey Centre in Mississauga against the Steelheads.
Game time is 7:00 PM.