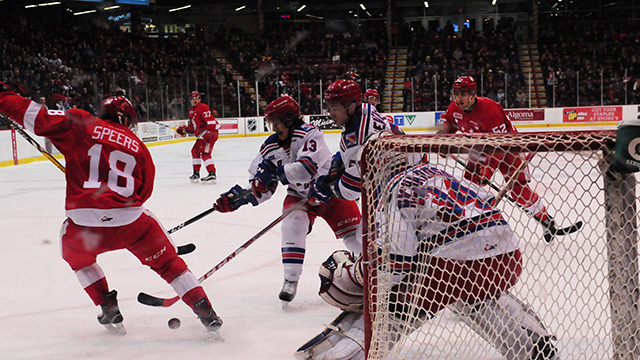 SAULT STE. MARIE, ON-
For the third time in the last four years the Soo Greyhounds are West Division champions.

As they closed out their season series with the Kitchener Rangers, a game that was never in doubt saw the Hounds skate to a 6-1 victory over the visitors at the Essar Centre Friday Night.
That win coupled with a Windsor loss in Sarnia guaranteed the Hounds no worse than the 2nd seed in the Western Conference heading into the OHL playoffs.

“Obviously to win the division, it had looked like it was going to go down to the last weekend but our kids played well.  Windsor stumbled through a few games and gave us some breathing room” began Hounds Head Coach Drew Bannister when asked about how big clinching the division title was.

“There is still a few hockey games left and we have an opportunity to maybe close the gap on Erie so we’ll continue to push forward and win hockey games.”

A game that saw a fast pace throughout, and some chippy play begin late in the second and spill over into the third, saw the Hounds connect on their first powerplay of the night.
Just before the game was ten minutes old, BOBBY MACINTYRE fired the puck past Luke Richardson for his 26th goal of the season before falling, giving the Hounds a 1-0 lead.

And with Kitchener on a powerplay of their own, the Hounds would strike on the penalty kill yet again.
BORIS KATCHOUK settled the puck inside his own zone and chipped it out to MACINTYRE in neutral ice before the return feed sent the Kitchener native in behind the Rangers defence where he would net his 31st goal of the year and a 2-0 lead.
That duo (Katchouk/MacIntyre) worked together for the second time in as many games shorthanded.

The lead increased to 3-0 in the final minute (19:42) when BARRET HAYTON fed the puck through the middle and a streaking CONOR TIMMINS placed home his 7th goal, and 58th point of the season, giving the Hounds a 3-0 lead through twenty minutes.

Kitchener would start the second period with a 7-2 shot advantage, but as the Hounds pushed back to outshoot the Rangers 8-3 over the final thirteen minutes, they would add two more goals.

At 14:27, BLAKE SPEERS made a no look pass from deep beside the net out to BORIS KATCHOUK who tee’d up a blast past Richardson for his second goal of the night, and a 4-0 lead.

Just over three minutes later, TIM GETTINGER wristed a shot high over the Rangers’ goalies shoulder for a 5-0 lead through two periods.

The third period saw Luke Opilka appear in his first action for the visitor’s in nine games, relieving Richardson who ended the night with 13 saves on 18 shots.

The Hounds scored their sixth and final goal of the game under five minutes into the third period when BARRETT HAYTON delayed teh play before feeding MAC HOLLOWELL who fired home his 3rd goal of the year from the top of the circle for a 6-0 lead.

Kitchener would spoil MATTHEW VILLALTA’s shutout bid with just over three minutes remaining wihen Joseph Garreffa scored on Kitchener’s 40th shot of the night, but the Hounds prevailed in the 6-1 victory.

The win was the Hounds 45th victory of the season, improving their record to 45-15-3-1, good for 94 points, and claiming the division crown.

“We’re certainly offensively things are starting to click for us at the right time.  Defensively I didn’t like our game as much as I have in the past.  I didn’t think we were as sharp in the d-zone today” said Bannister when asked about his team’s skill being too much on this night.

“But offensively we were at our best, there was no question about that, we did a lot of good things, created a lot of opportunities with the chances we had” he concluded.

GAME NOTES;
• Boris Katchouk’s goal at 14:57 of the first period was the team’s 21st shorthanded goal this season.  That set a new team record for shorthanded goals in a season eclipsing the old mark of 20, set in 1991/92.

• The Greyhounds are three (3) points behind Erie for 1st in the Western Conference and 1st overall in the OHL.  Both teams have four games remaining in the regular season.

UP NEXT;
The Greyhounds now travel to Sudbury to meet the Wolves this Sunday, March 12 (2 PM) in Game 6 of the Bell Challenge Cup.

ShawTV will broadcast the game starting at 2:00 PM

Don’t forget to check out our GAME PREVIEW online at www.soogreyhounds.com early on Sunday morning.