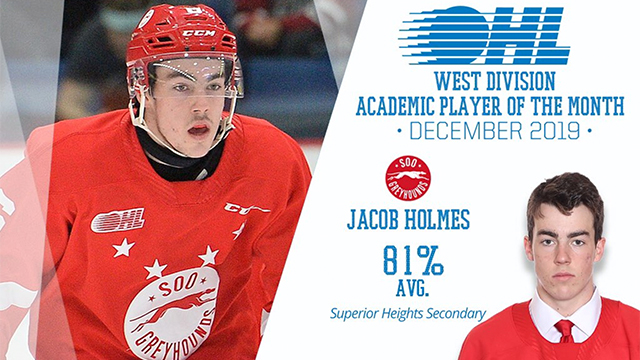 The Ontario Hockey League today announced that Giordano Biondi of the Sudbury Wolves, Cameron Tolnai of the Ottawa 67’s, Stuart Rolofs of the London Knights, and JACOB HOLMMES of the Soo Greyhounds have been named the OHL Academic Players of the Month for December.

West Division: West Division Academic Player of the Month honours have been awarded to Jacob Holmes of the Soo Greyhounds. He holds an overall average of 81% at Superior Heights Secondary School that notably includes a 99% mark in Mathematics. Holmes is described by his teachers as “a well-liked student/athlete who works willingly and cooperatively with his classmates.” Holmes has also received positive comments on behalf of the school’s administrative staff.

“[Jacob] has successfully demonstrated that he has adjusted well to the many challenges of life in the Ontario Hockey League,” stated Greyhounds Academic Advisors Jerry Bumbacco and Mary-Lynne Lukenda.

Holmes, a native of Alliston, Ont., was a first round draft pick of the Greyhounds in last April’s OHL Priority Selection. He has collected three goals and four assists for seven points through 33 games with the Greyhounds in his rookie season. He represented Team Black at the World Under-17 Hockey Challenge in November where he registered an assist in five games.

East Division: Ottawa’s Cameron Tolnai is the East Division Academic Player for the month of December. He boasts a 92% average in his grade 12 university level courses that include International Business, Economics, Kinesiology, and Advanced Functions at Blyth Academy Ottawa. Upon graduating, Tolnai plans on pursuing a Business Commerce university degree.

His work ethic has stood out among his teachers, teammates, and peers. “Cam epitomizes a student athlete,” said Eileen Duffin, 67’s Academic Advisor. “He is an extremely motivated student, committed to only turning in top notch work while balancing the demands of the hockey schedule.”

The 67’s drafted the Oakville, Ont. native sixth overall in 2018 OHL Priority Selection after he put up 80 points (31-49-80) in just 35 games with the Oakville Rangers Minor Midgets. Tolnai totaled three goals and 10 assists for 13 points in his rookie season as a 67, and has seven points (2-5-7) through 28 games so far in his sophomore year.

“Giordano is always engaged in class lessons and activities,” writes one of his teachers. “[He] takes responsibility for his own learning.”

Biondi has scored one goal through his first 13 games with the Wolves. He was selected in the 14th round of the 2018 OHL Priority Selection out of the Sudbury Wolves Minor Midget program where he registered nine goals and 11 assists for 20 points in 21 games played. A Sudbury native, Biondi spent the 2018-19 season with the NOJHL’s Rayside-Belfour Canadians, amassing 32 points (15-17-32) in 47 games.

Midwest Division: London’s Stuart Rolofs has been recognized as the Midwest Division’s Academic Player of the Month for December. A grade 11 student at Blyth Academy in London, he’s maintained an 84% average and has received praise for his respect and determination in the classroom.

“Stuart is a dedicated and ambitious student who maintains strong relationships with both his peers and teachers,” said Patricia Hurley, the Knights’ Academic Advisor.

Rolofs, who hails from Carp, Ont., was drafted 20th overall by the Knights last April. He’s earned two assists through his first 15 OHL games and put up high numbers with the Kanata Lasers U18 program last year, rounding out the season with 33 goals and 24 assists for 57 points in 39 games.

Last season, the OHL Centrally Administered Scholarship Program facilitated scholarships for 340 OHL Alumni at 69 different academic institutions across North America with a total scholarship payment in excess of $3.2 million. Since the 2007-08 season, OHL Scholarship payments have totalled more than $25 million.