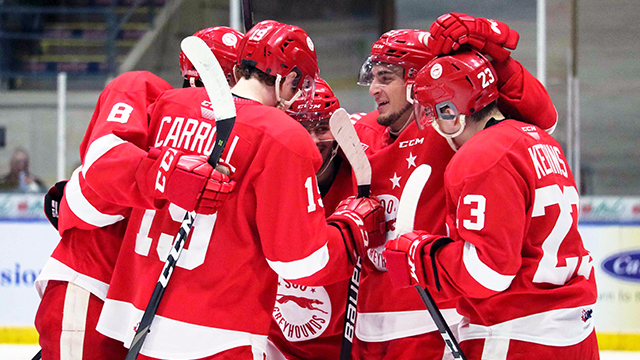 It was a game that had plenty of turning points.

For the Soo Greyhounds, a shorthanded goal started to turn the tide and a point shot through traffic helped the team remain unbeaten thanks to a 6-4 win over the Saginaw Spirit on Saturday night at the Dow Event Center in Saginaw.

With four regular season games in the books, Greyhounds coach John Dean feels like the team has learned plenty even though the regular season is four games old.

“We’ve really learned a lesson that we are very successful when we work extremely hard,” Dean said. “We’re not a good enough team to not work shift in and shift out. Being 4-0 is nice but our team realizes that it’s achieved by work ethic. I don’t envision this group sitting back and not putting in that effort game in and game out.”

The message has resonated to the players.