Greyhounds wrap up 2018 with win 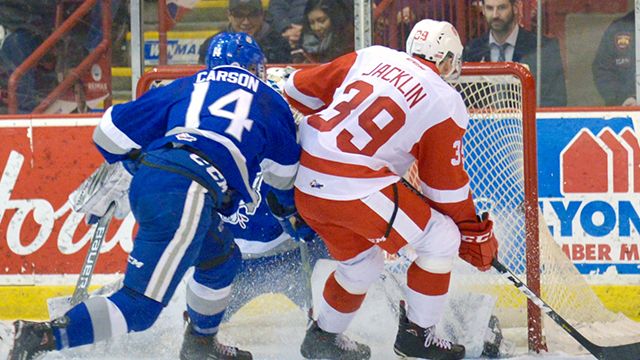 They called it the best 40 minutes they’ve played as a team this season and it was a major difference-maker.

The Greyhounds led 3-2 through two periods but limited the Wolves offensively throughout.

“The first 40 might have been our most complete 40 minutes of the season (as a team),” said Greyhounds Coach John Dean. “It’s not all about scoring goals. We played the right way and had lots of chances.

“(Sudbury) had a good push there in the third,” Dean said. “We still played a pretty good period and our special teams rose to the occasion.”

The game was a struggle for the Wolves through two periods.

“We didn’t generate much and we turned pucks over,” Wolves Coach Cory Stillman said of the first two periods.

“If you don’t show up and play the game right for 60 minutes, you’re going to lose hockey games,” Stillman also said. “Today we played for 20 minutes and it’s not good enough.”

With the Wolves pushing in the third period, forward David Levin took a penalty and the Greyhounds took advantage of the power play midway through the frame. Cole MacKay scored on a rebound of a Zack Trott shot to make it 4-2 Greyhounds. The goal was one of a pair of goals on the man advantage for the Greyhounds in the win.

UP NEXT;
The Greyhounds will enter the New Year by starting off a three-game road trip on Thursday, January 3rd in Sarnia.
Game time against the Sting is 7:05 PM.

Fans can tune into all the action starting with the Soo Video TV Pre-Game Show on Rock 101 (101.3 FM, online HERE) starting at 6:35 PM or watch on Shaw Spotlight at 7 PM.