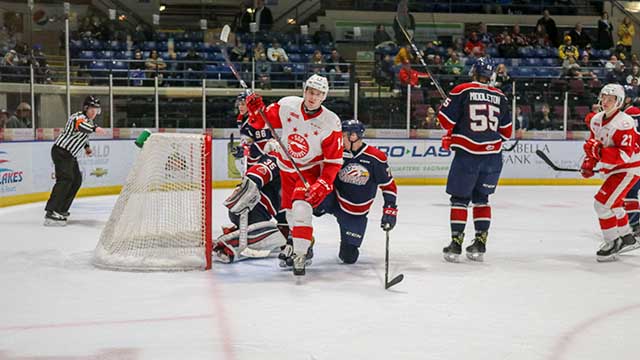 Story by Brad Coccimiglio (Sootoday.com)
A big third period has put the Soo Greyhounds in the drivers’ seat against the Saginaw Spirit.

Goals by Boris Katchouk and Hayden Verbeek 13 seconds apart led to a five-goal outburst and a 7-3 Greyhounds win to give the Ontario Hockey League’s top regular season team a 3-0 lead over the Spirit heading into game four on Wednesday night.

“That was huge,” Katchouk said. “That created the momentum swing for us and we never let off the gas pedal.”

“If you’re going to go deep in the playoffs, you have to have strong third periods, it’s got to be your best period,” said Greyhounds forward Taylor Raddysh, who had two goals and an assist in the game.

The goals lifted a Greyhound team that struggled in the early stages of the period.

“Early in the third, we weren’t very good, but we seemed to get ourselves going,” said Greyhounds Coach Drew Bannister. “Matty (Villalta) made a couple of really big saves early in the third and then we started to pick up the pace of play.”

Bannister went on to say he felt the two quick goals “took the wind out of their sails.”

“We played really well until their third goal and we came unwound there,” Spirit Coach Troy Smith said on the Spirit television broadcast. “We have to have good bounce-back shifts. We didn’t and they scored two quick goals there.”

By Peter Ruicci (Sault Star)
Two goals in 13 seconds did more than put the Soo Greyhounds in front on Monday.

The quick outburst touched off a five-goal third period, a 7-3 victory over the Saginaw Spirit before 4,123 at Dow Event Center, and a 3-0 lead in the best-of-seven, Western Conference quarter-final.

“That was huge. It created a momentum swing for us,” said Hounds winger Boris Katchouk, whose team can complete a four-game sweep on Wednesday (7:05p.m. in Saginaw).

“For sure, that took a lot out of them,” winger Taylor Raddysh said of the goals by Katchouk and Hayden Verbeek.

The quick markers broke a 2-2 tie and completely changed the outlook for both teams.

“It kills your life,” Raddysh said of being on the wrong side of back-to-back goals in a tight game. “And for us it was motivation to keep going.”

After Soo goalie Matt Villalta made big saves on Blade Jenkins, late in the second period, and both Reilly Webb and D.J. Busdeker early in the third, the Hounds caught a break.

Moments later, Keeghan Howdeshell fed Hayden Verbeek who went in alone and beat Cormier with a backhander for a 4-2 lead at 6:42.

Raddysh “made a heads-up play and gave me a tap-in,” said Katchouk.

“That took the wind out of their sails,” Hounds head coach Drew Bannister said of the Spirit’s reaction to the two goals. “It went from 2-2 to 4-2 real quick.

After the consecutive goals “we never let up off the pedal,” added Katchouk, who scored twice.

Raddysh also had a pair of goals, including a power-play marker, and an assist.

“We played real well until their third goal,” Spirit head coach Troy Smith said on Saginaw’s OHL Live broadcast. “And then we became unwound as they scored two quick ones. Our details have to be tight and our discipline has to be better.”

Just over six minutes later, Rasmus Sandin’s point shot trickled through Cormier’s legs for a power-play goal and a 5-2 lead.

After the Greyhounds 8-0 blowout win on Sunday here, the Spirit played a solid first 40 minutes.

The teams went into the second intermission locked in a 2-2 tie.

UP NEXT;
The Greyhounds take a 3-games-to-none lead in the series into Game 4 this Wednesday Night – March 28th.
Game time is 7:05 PM.

Fans can tune into all the action starting with the Soo Video TV Pre-Game Show on Rock 101 (101.3 FM) starting at 6:35 PM or can watch live by purchasing the game on OHLLive.com