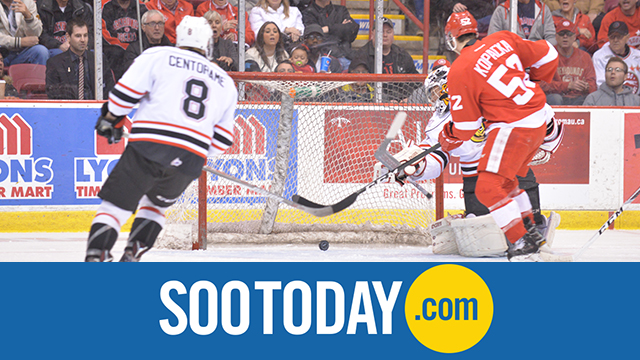 Special teams became a difference for the Soo Greyhounds on Friday night.

A pair of goals on the power play and killing off a lengthy two-man advantage helped lift the Greyhounds to a 4-1 win over the Owen Sound Attack Friday at the Essar Centre in game two of their Western Conference semifinal series.

Owen Sound finished the night scoreless in six power play opportunities which included a lengthy 5-on-3 at the end of the second period.

“The boys were blocking shots and getting pucks out so that’s huge when we can do that, especially on a five-on-three,” said Greyhounds goaltender Joseph Raaymakers.

“Those were big kills for us,” Greyhounds Coach Drew Bannister. “If they score on that, there’s a lot of momentum going their way. It was a big kill for us in the sense that we were able to come out of if not giving anything up and continue to push.”

McGill would say that Raaymakers was the difference on the two-man advantage.

“He made a couple of big saves,” McGill said.