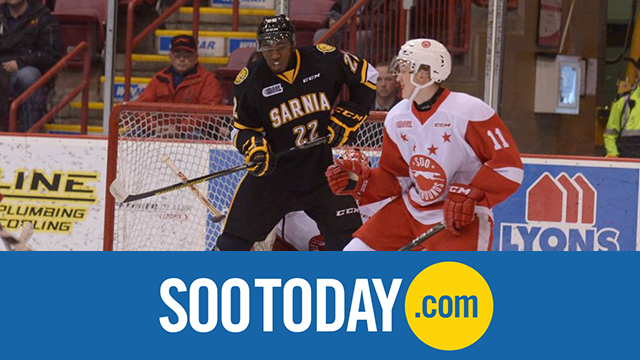 Respect can make a difference in a hockey game.

On a day when the Soo Greyhounds struggled to create offence, the Sarnia Sting got some breaks en route to a 7-3 win over the Greyhounds at Progressive Auto Sales Arena in Sarnia in Ontario Hockey League action on Saturday afternoon.

Greyhounds forward Boris Katchouk said he was “embarrassed and disappointed” by the loss saying that the Greyhounds didn’t show enough respect to a Sting team that beat London earlier in the week.

“It was a lack of respect,” Katchouk said. “We know they were coming hard (after a loss to Erie on Friday night) and we started slow.”

Franco Sproviero and Drake Rymsha would score goals 2:29 apart in the third period.

“Right from the start we weren’t ready,” said Greyhounds Coach Drew Bannister. “We lacked intensity and urgency and that can be said throughout the whole game.

“Whether we were on the power play, the penalty kill or five-on-five, they were the better team and they outworked us,” Bannister also said. “They deserved to win the hockey game.”

UP NEXT;
It’s back to the Essar Centre for a pair of home games this coming week for the Hounds.

Friday, January 27 the top two teams in the West Division meet when the Hounds host the Windsor Spitfires @ 7:07 PM.
The game is presented by Algoma University.

Then on Saturday, January 28 it’s the one-and-only appearance by the Peterborough Petes.
Game time is 7:07 PM and presented by Wawanesa Insurance..

You can catch the all the action beginning with the Pre-Game Show on Rock 101 both nights starting at 6:37 PM on 101.3 FM or online HERE.

Both games will also be televised on ShawTV starting at 7 PM.