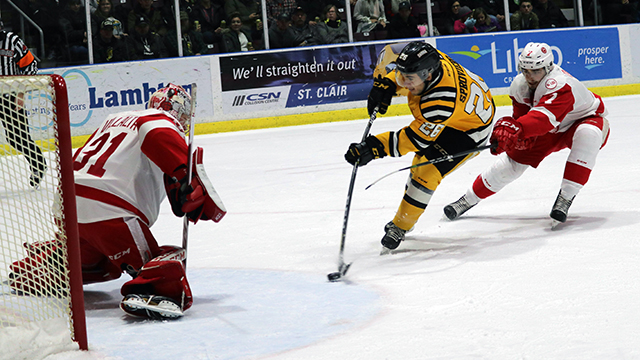 Mistakes proved to be too costly.

A goal by Adam Ruzicka, his second of the night, at 14:04 of the third period was the difference as the Sarnia Sting beat the Soo Greyhounds 5-3 on Friday night at Progressive Auto Sales Arena in Ontario Hockey League action5

It was the first regulation time loss for the Greyhounds since Oct. 27, also a loss to the Sting in Sarnia.

For the Greyhounds, the game was one that the team struggled defensively, and the Sting capitalized.

“Our whole back end struggled in the game and as a group it was probably the worst game I’ve seen them play this year,” Bannister also said.

Overage forward Hayden Verbeek added that the Sting “out-battled” the Greyhounds at times.

“I know our guys have a lot more than what we gave tonight,” Verbeek said. “I don’t think it was our best performance and everybody knows that we’ve got more to give.”