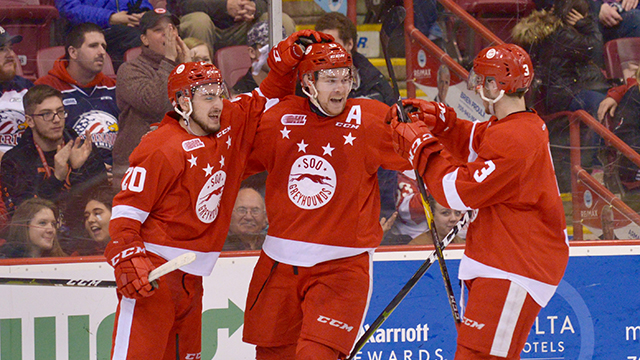 The Soo Greyhounds needed to be at their best.

Facing a 3-0 deficit and needing a win to avoid elimination from the Ontario Hockey League playoffs, the Greyhounds forced a fifth game against the Saginaw Spirit thanks to a 3-0 win at the GFL Memorial Gardens on Thursday night.

The win means the series shifts back to Saginaw for game five on Friday night.

“That’s our best game of the series,” Greyhounds coach John Dean said. “We believe in there that we didn’t deserve to be down 3-0.”

“Credit to our guys for playing a detailed game,” Dean added.

A tight opening period saw the game remain scoreless with he Spirit holding an 11-8 shot edge in what was more of what the Greyhounds coach expected in the series.

Dean said the tighter game in game four was “how I expected the series to be for almost every single period.”

Jordan Sambrook opened the scoring just over six minutes into the second period when he converted a nice feed from Jaden Peca for what was the eventual game-winner.

Goals by Keeghan Howdeshell and Barrett Hayton in the late stages of the third period sealed the victory for the Greyhounds.

Morgan Frost assisted on all three goals for the Greyhounds.

UP NEXT;
The two teams will face a quick turnaround in this Western Conference Semi-Final series when they meet Friday Night – April 12th @ Wendler Arena in Saginaw, MI.
Game time is 7:05 PM.