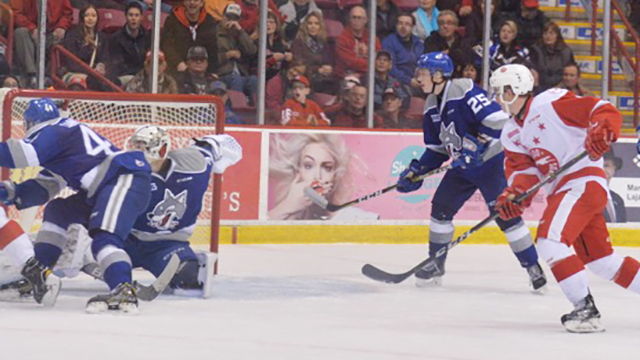 It’s a tough time to gauge rosters for Ontario Hockey League teams as the pre-season came to a close on Sunday for many teams.

With players away at NHL training camps, teams tend to play games short on bodies and that was no different for the Soo Greyhounds and Sudbury Wolves on Sunday afternoon.

Both clubs were short on bodies as the Greyhounds beat the Wolves 6-4 at the GFL Memorial Gardens.

“It’s an interesting situation,” said Greyhounds Coach John Dean. “As a coaching staff, we prep this team as if this is what we’re going to have (to start the season).

“Everybody is missing guys and it’s tough,” said Wolves Coach Cory Stillman said. “Guys are playing in roles that they won’t be in the regular season. On the other hand, it’s an opportunity to show what you can do when killing penalties, playing five-on-five or on the power play.”

Tyler Johnson got the start for the Greyhounds and was solid, stopping 22 of 23 shots in just over 32 minutes of work.

“He played great,” Dean said. “He was fantastic tonight.”

Rookie Ethan Taylor entered the game and stopped 10 of 13 shots the rest of the way.