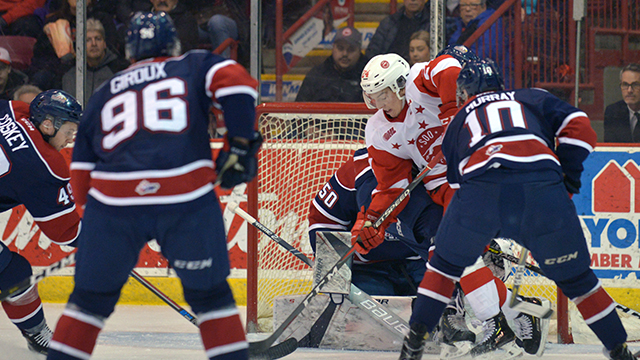 Looking back at it, the Soo Greyhounds are happy with a lot of aspects of their first game following the Christmas break.

A strong opening period and an ability to rebound from a second period that wasn’t as good as they wanted were two major positives following a 4-2 loss on Friday night against the Saginaw Spirit at the GFL Memorial Gardens in Ontario Hockey League action.

The team carried the play in the opening period and after Saginaw pushed in the middle frame, the Greyhounds came back with a strong final period.

“Our first period was fantastic,” Dean said. “In the second period, Saginaw played a really good period and we got away from what we did well in the first, which was being really dogged on the puck. In the third, we played another really good period.”

For the Spirit, Friday’s win was a big one as the team looked to maintain pace with the Greyhounds in the OHL’s West Division.

UP NEXT:
The Greyhounds cap off the Year 2018, and the month of December on Saturday Night, December 29th, when they host their Northern Ontario rivals, the Sudbury Wolves.
Game time is 7:07 PM at the GFL Memorial Gardens.

Tickets are available by visiting the GFL Memorial Gardens Box Office (presented by SK Group) starting at 10 AM, or online at www.gflgardens.ca or by phone at 1.866.775.9422.