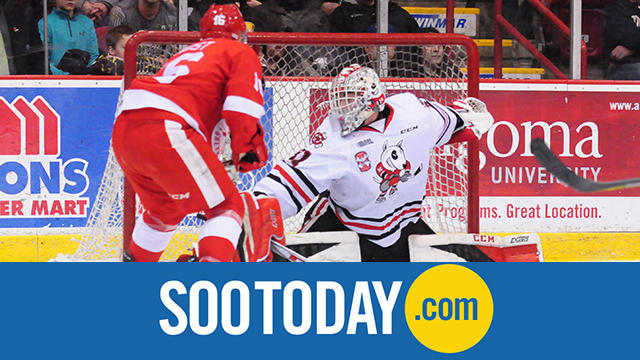 After a disappointing effort 24 hours earlier, the Soo Greyhounds improved on what was one of the glaring issues that plagued the team in a loss to the Kitchener Rangers on Friday night.

The Greyhounds used 53 shots and eight goals to beat the Niagara IceDogs 8-1 in Ontario Hockey League action at the Essar Centre on Saturday night in what was a rebound game from a disappointing 4-1 loss one night earlier.

“Obviously, the response was what we wanted,” said Greyhounds Coach Drew Bannister. “It was good to see the guys execute.”

“We did a better job of getting pucks to the net and getting guys to the net,” Bannister added. “We attacked well off the rush, which was good to see.”

The line of Morgan Frost centering Tim Gettinger and Zach Senyshyn combined for __ points for the Greyhounds. Gettinger scored three goals while Frost and Senyshyn had a goal and two assists each

“We’re a new line but we know each other pretty well so the chemistry was really good,” Frost said.

“Tonight, it just all came together,” Gettinger said of the trio, who were put together on Friday night against Kitchener. “We move the puck well and we make plays. Tonight, it showed what happens when we make plays.”