Greyhounds need timely saves, shootout to get past Sting 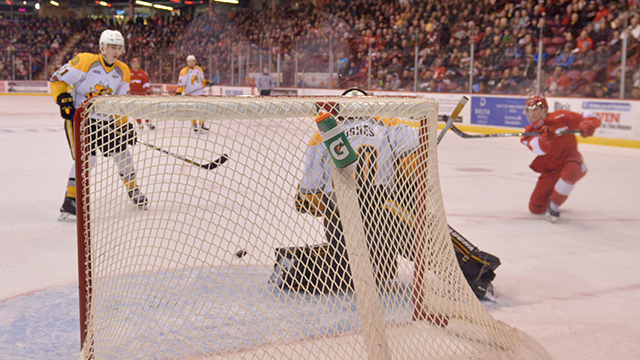 A pair of big saves in overtime turned into the difference for the Soo Greyhounds.

Matthew Villalta made pad saves on Adam Ruzicka and Jordan Kyrou in overtime as the Greyhounds picked up a key 6-5 shootout victory over the Sarnia Sting Friday night at the Essar Centre.

With 1:21 to go in the extra period, Villalta went cross-crease to stop Ruzicka with his left pad. Just over 20 seconds later, Villalta wold make a right par stop on Kyrou with the game in the line.

“They were timely saves,” Villalta said. “I needed to make them and found a way to do it.”

I got a good push on (the Ruzicka chance) and it hit the toe of my skate and the other one, it was the same type of play, so I just did the same thing and got my pad out,” Villalta also said.

Villalta proceeded to stop both players in the shootout to help seal the Greyhounds victory.

“They’ve got a lot of skill,” Villalta said of the pair. “I knew they were going to have some slick hands. I tried to stay patient and let them make the first move.”

In addition to a pair of goals and an assist in regulation time, Jack Kopacka had the shootout winner for the Greyhounds. Overage forward Hayden Verbeek assisted on four goals and Taylor Raddysh added a pair of assists. Tim Gettinger chipped in with a goal and an assist while Mac Hollowell and Morgan Frost also scored.

Villalta finished the night with 37 saves.

“Some of the goals, Matty didn’t have a chance to stop them,” Bannister said. “He couldn’t see them. There were too many guys in front of him.”

“He was outstanding in overtime and the shootout,” Bannister also said.