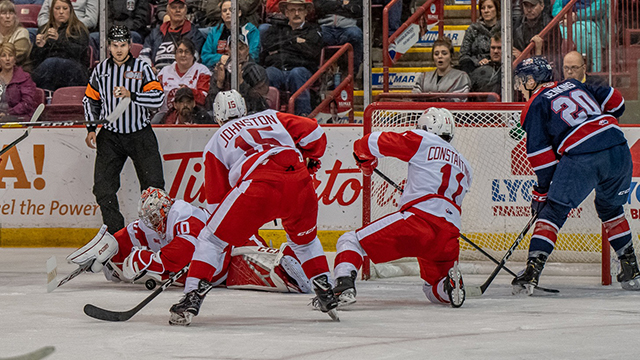 The Soo Greyhounds and Saginaw Spirit left the GFL Memorial Gardens with some positives after a key Ontario Hockey League West Division battle on Wednesday night.

Damien Giroux had the overtime winner as the Spirit beat the Greyhounds 4-3 in the lone game around the league Wednesday.

For the Greyhounds, it was a bounce-back game following a disappointing effort on Monday on the road in North Bay while the Spirit rebounded after giving up the tying goal in the third period on a play the team feels should have been whistled dead.

“We had a great game,” said Greyhounds coach John Dean. “We played 55 really good minutes. When we tied it up, we looked a little nervous.

“I thought we did everything but win,” Dean also said.

In overtime, with Jaromir Pytlik, Tanner Dickinson, and Ryan O’Rourke on the ice for the Greyhounds, the Spirit won a faceoff in the Sault zone amd the puck eventually found its way to Giroux in the right circle. Giroux hesitated initially before beating Greyhounds goaltender Christian Propp for the game-winner.

UP NEXT;
The home stand continues for the Greyhounds with a pair of games this weekend.

Saturday, October 19 the Barrie Colts make their one-and-only appearance of the regular season at 7:07 PM.
Less than twenty-four hours later, the North Bay Battalion make their final visit to town at 2:07 PM.

Tickets for both games, and all regular season home games are available at the GFL Memorial Gardens Box Office, online at www.gflgardens.ca or by phone at 1.866.775.9422.