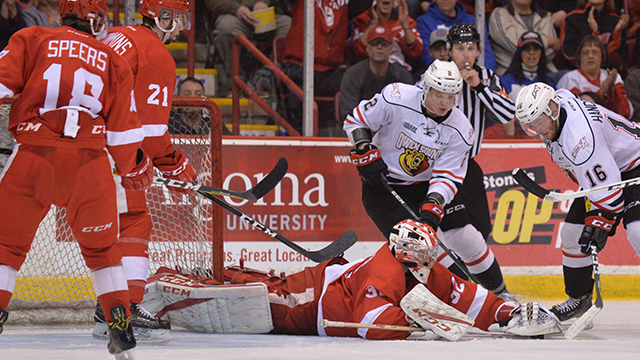 SAULT STE. MARIE, ON-
Mistakes at key times can be a killer for any hockey team.

Needing a solid start, mistakes would lead to the Greyhounds falling behind 3-0 through one period in a 4-3 loss to the Owen Sound Attack on Friday night in Ontario Hockey League playoff action. The loss is the Greyhounds third consecutive as the team now heads into game six trailing its Western Conference semifinal series 3-2.

“Our start wasn’t very good,” said Greyhounds Coach Drew Bannister. “We made three uncharacteristic plays that wound up costing us goals in those situations.”

“We were opportunists in the first period,” said Owen Sound Coach Ryan McGill. “We played structurally pretty well and we took advantage of a few moments where we had the opportunity to put some pucks to the net.”

The Greyhounds would manage to rebound over the final 40 minutes to make the game close, outshooting the Attack by a 30-21 margin.

“Obviously from what we saw in the second and third periods, there’s no question who the better team was (in the final 40 minutes),” Bannister said.

An unfortunate bounce would be the only goal for Owen Sound over the final two periods.

Petrus Palmu had the winning goal for the Attack as his shot from above the top of the left faceoff circle in the Greyhounds zone was going wide of the Greyhounds goal before it hit Hayden Verbeek in the slot with 2:26 to go.

UP NEXT:
The Greyhounds will now head to Owen Sound for Game 6 of this series on Sunday, April 16th.
(Attack lead best-of-seven series 3-2)

Game time at the J.D. McArthur Arena is set for 6 PM.

Fans can tune into the action starting with the Pre-Game Show on Rock 101 (101.3 FM) starting at 5:30 PM or listen online HERE while ShawTV will also have the broadcast starting at 7 PM.