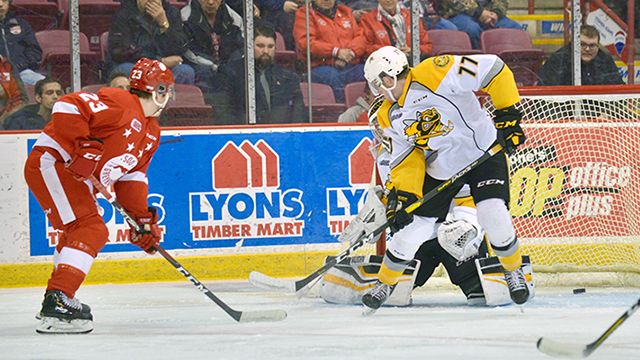 It was about five months later than planned but the Soo Greyhounds home opener is finally in the books.

While he admitted there were times in the game that the team wasn’t perfect, Greyhounds Coach John Dean credited an ability to capitalize with some key goals early and late in periods en route to a 6-2 Ontario Hockey League win over the Sarnia Sting at the GFL Memorial Gardens on Tuesday night.

With a 3-1 lead, the Greyhounds broke the game open late in the second period with a pair of goals in the final minute of the period.

Keeghan Howdeshell made it 4-1 on the power play, completing a three-way passing play with Morgan Frost and Cole MacKay just 10 seconds into the man advantage.

“That was a big goal,” Dean said. “How quickly it happened, credit to the guys because they made it look pretty easy. And the rest of the bench looks at it as ‘That’s what we’re all about.’ And you feel a little better about yourself the rest of the game.”

Then, with 1.9 seconds to go in the period, a shot by Mac Hollowell found its way past Sarnia goaltender Cameron Lamour to make it 5-1.

“The two penalties at the end of the second period really hurt us,” Sarnia Coach Derian Hatcher said. “At that point we were coming, and the score was 3-1 and we were out chancing them at that point.”

UP NEXT;
The Greyhounds embark on their final extended road trip of the season tomorrow, while action kicks off in the three-game set on Thursday, February 21st @ Windsor.
Game time against the Spitfires is 7:05 PM.