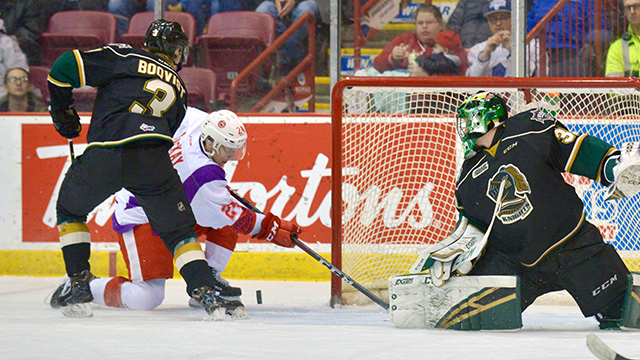 When the Soo Greyhounds left the GFL Memorial Gardens on Saturday night there was a sense of disappointment despite a win over the Niagara IceDogs.

On Sunday afternoon, it was that experience that helped the team battle to a 6-3 Ontario Hockey League win over the London Knights in a key Western Conference matchup for both clubs.

The Greyhounds scored three times in the second period and rebounded after what was a disappointing finish to Saturday’s game against Niagara.

“I just liked our response from Wednesday (against Sudbury), and even (Saturday), we weren’t happy with that win,” said Greyhounds Coach John Dean. “The way the guys came out and battled. We played a really well-structured game.”

Adjusting to the Knights speed through the neutral zone in the second period was a positive for the Greyhounds as well.

“The guys did a good job (adjusting), and then when it matters in the third period, they closed it out,” Dean said. “We didn’t do anything fancy.”

The game was one that saw key players make plays at key times for the Greyhounds. That included a pair of key blocked shots with the Greyhounds on the penalty kill.

The first came from captain Barrett Hayton, who blocked a point shot from Knights defenceman Evan Bouchard moments before veteran defenceman Jacob LeGuerrier also stepped in front of a shot to keep the Knights at bay.

“Our leadership group was fantastic,” Dean said. “They led the way.”

UP NEXT;
The Greyhounds head out on a quick two-game Northern Ontario road trip this coming week with action starting on Thursday, February 14th at the North Bay Battalion.
Game time is 7:00 PM from the Memorial Gardens.