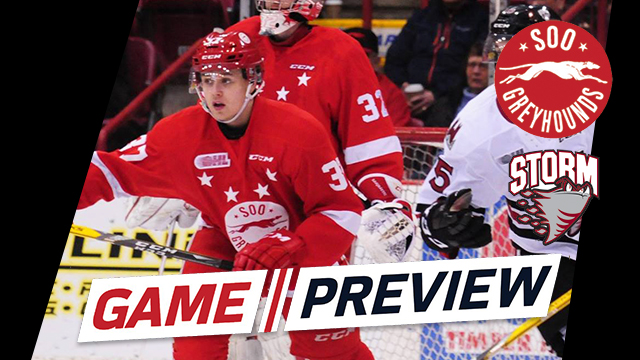 The Greyhounds will make the three-hour trip from Windsor to Guelph on Friday in advance of their encounter with the Storm.
TONIGHT (7:30 PM) caps off the season series between the two teams.

Entering tonight the Greyhounds are looking for the series sweep as they have won the previous meetings between the two teams while outscoring Guelph 15 to 9.
They are also looking to get back in the win column after seeing a three-game streak come to a close with last night’s loss @ Windsor (see the game story HERE).

For Guelph, this is the first game of the week and they enter action following back-to-back losses to Kitchener (3-4) and London (1-8) respectively.
They are 3-7-0-0 in their last 10 games played.

HEAD-TO-HEAD
Tonight is the fourth and final regular season meeting between the Hounds and Storm.

Let’s take a look at their season-series so far;

W 7-5, Feb. 10 @ SSM
The Storm opened up a 3-0 lead scoring the trio of goals in a span of 1:26 of the first period before Boris Katchouk put the Hounds on the board;  Storm would later lead 5-2 after forty minutes;  Colton White started the third period scoring 1:01 in and goals followed by Hayton, Speers x2 and Senyshyn as the Hounds rallied for the win with a 5-goal third period;  Hounds outshot Guelph 41-27.
(Boxscore)

SOW 3-2, Dec. 31 @ SSM
The Greyhounds held leads on two separate occasions before sitting tied 1-1 after the first period (Senyshyn) and 2-2 after the second period (Hawel);  After overtime solved nothing, The game would go just three rounds of a shootout and the only goal was scored by Otto Makinen (GWG);  Hounds were 1-for-6 on PP and 4-for-4 on PK
(Boxscore)

LEADING ROOKIE
Storm defenceman Ryan Merkley not only leads all OHL rookies this season, he is the points leader on the Storm.
The team’s 1st Round Selection in the 2016 OHL Priority Selection enter’s tonight with 10 goals and 37 assists (47 points) in 53 games played.

Along with the points lead, the Mississauga, ON native is 3rd in shots and 1st in assists for all first-year OHLer’s.

KOPACKA SETS A NEW CAREER-HIGH
Along with pacing the Greyhounds with a two-goal effort one night ago, JACK KOPACKA eclipsed his point total from one season ago by a single point and now sits with 27 goals and 17 assists (44 points) in 57 games played this season.

The second-year forward now has points in four consecutive games (4g, 2a) while recording a multi-goal game for the 6th time this season.

STEPPING DOWN FROM THE STORM
Just over a week ago it was announced that Guelph GM Mike Kelly will be stepping down when his current contract with the club expires at the end of May.
The longtime member of their organization will be relocating to the Niagara region to be closer to his children and grandchildren.

Originally joining the Storm for the 1991-92 season, through a pair of stints that equalled 13 seasons, Kelly led the Storm to 3 division titles, 3 OHL regular season titles, 3 appearances in the OHL Championship series and was OHL Executive of the Year in 1994-95.

You can read the full story courtesy of guelphstorm.com HERE.

SINCE THE TRADE
Noah Carroll and Liam Hawel were involved in a trade between these two clubs back on January 6th.  Since the deal;

While not mathematically eliminated from the post-season dance, the numbers are stacked against the Storm.
They sit 17 points behind the Sarnia Sting for 8th in the Conference, with 9 games remaining (max available 18 points).

RADIO/TV
The Rock 101 pre-game show with Gerry Liscumb Jr. begins starting at 7:00 PM.  You can hear the action by tuning your FM dial to 101.3 or listen online HERE.

ShawTV will bring the live action as well starting at 7:30 PM. 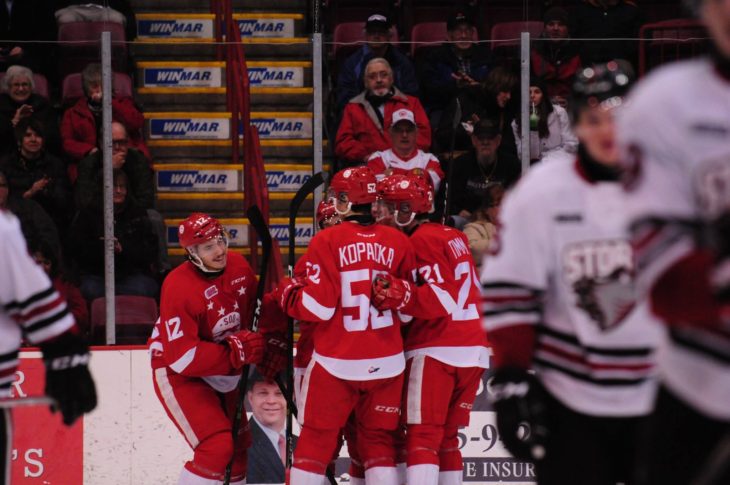