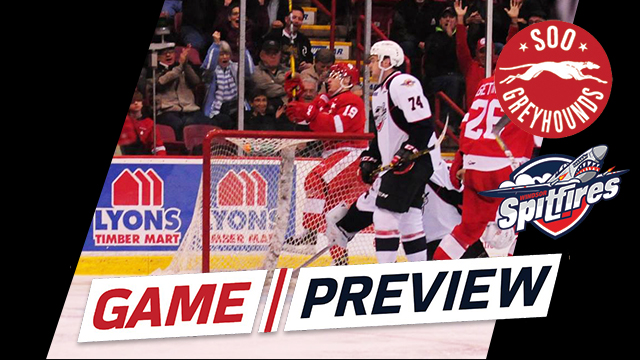 After a successful 8-game home stand that saw the Greyhounds yield 6 wins and 2 losses, the club is on the road this week for their final extended road trip of the regular season.
It all begins TONIGHT (7 PM) in a battle of the top two teams in the OHL’s West Division.

The Greyhounds enter action on a three-game winning streak.  Thanks to wins over Niagara (8-1), Sarnia (6-5) and North Bay (5-2), the Hounds have now put together a 3-game streak for the seventh time this season.
They are 7-3-0-0 in their last ten games.

Windsor comes into the game having dropped back-to-back games while being outscored 8-3 in losses to London (1-4) and Sarnia (2-4).
The Spitfires are 5-4-0-1 in their last ten games.

HEAD-TO-HEAD
Tonight is the sixth and final meeting of the regular season between the Hounds and Spitfires.

After dropping their season opener against Windsor, the Hounds have won three of the last four games against their division rival including a pair of back-to-back 4-1 victories.

With that said the GF/GA differential lends the slight advantage to the Hounds, 15-13.

Let’s take a look at their season-series so far;

W 4-1 Jan. 27 @ SSM
Boris Katchouk opened the scoring at 11:08 and the Hounds led 1-0 after twenty minutes;  Jeremy Bracco (WSR) had the lone goal of the second period as the teams were tied through two periods;  After David Miller scored early in the third (2:58) the Hounds would score twice in the final two minutes (Frost @ 18:09 and then Katchouk @ 19:25 into empty net) for the win;  Joseph Raaymakers made 37 saves on 38 shots
(Boxscore)

W 4-1 Nov. 30 @ SSM
Teams were tied 1-1 after the first period before skating through most of the second period scoreless;  Two late goals by the Hounds (16:42 by Miller, 18:15 by MacIntyre) provided the Hounds a 3-1 advantage;  Boris Katchouk rounded out scoring 0:23 into the third period;  Joseph Raaymakers made 35 saves on 36 shots faced while being named the Red Star Third Star of the Game
(Boxscore)

L 2-5; Oct. 27 @WSR
Windsor jumped out to a 2-0 lead by the 8:22 mark of the first period;  After Tim Gettinger and Morgan Frost scored to tie the game in the second period Windsor responded just 39 seconds later to regain the lead;  Two additional goals, including an empty netter, provided Windsor the 5-2 advantage;  Both teams scored once on PP
(Boxscore)

W 3-1;  Sept 29 @WSR
The Hounds never trailed in the game as Bobby MacIntyre in the first period and Barrett Hayton with his 1st OHL goal in the second had the Hounds leading 2-0 through forty minutes;  Cole Purboo put Windsor on the board before David Miller sealed an empty goal in the win;
(Boxscore)

L 2-5;  Sept 23 @SSM
Single goals in both the first and second periods (Frost, Hawel) had the Hounds with a two goal cushion after two periods;  Windsor tied the game with two goals less than a minute apart in the third while reeling off 5 unanswered goals for the win;  Windsor had 2PPG;  Sooite Mario Culina 24 saves in win
(Boxscore)

COUNTDOWN TO THE DIVISION CROWN
Five points is the separation between the Hounds (85 points) and Spitfires (80 points) for 1st in the OHL’s West Division.

Following tonight each team has eight games remaining in the regular season.

The Hounds will split their remaining games with four home/away respectively, while Windsor will play five at the WFCU Centre and three away from home. 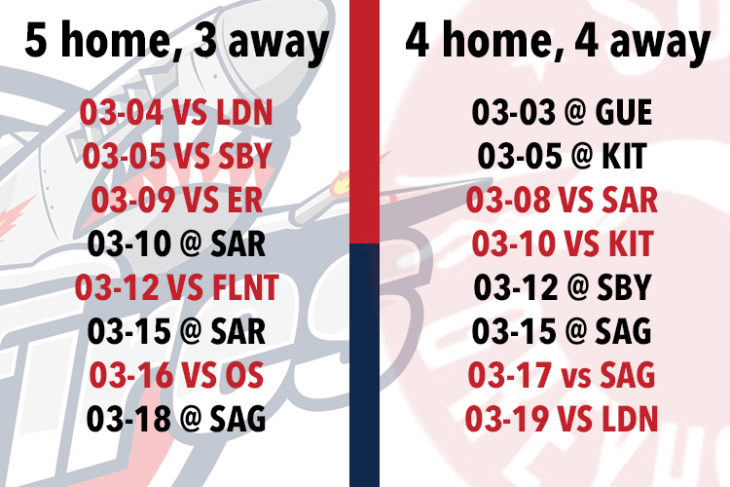 SINCE DEADLINE DAY
The OHL trade deadline passed over a month-and-a-half ago, and since January 10th the Hounds and Spitfires have near identical records.

DID YOU KNOW?
• Greyhounds’ netminder Matthew Villalta joined Mackenzie Blackwood (BAR) as the second rookie in the past five years to reach the 20-win mark

RADIO/TV
The Rock 101 pre-game show with Gerry Liscumb Jr. begins starting at 6:40 PM.  You can hear the action by tuning your FM dial to 101.3 or listen online HERE.

Sportsnet will be broadcasting the game nationally, starting at 7:00 PM 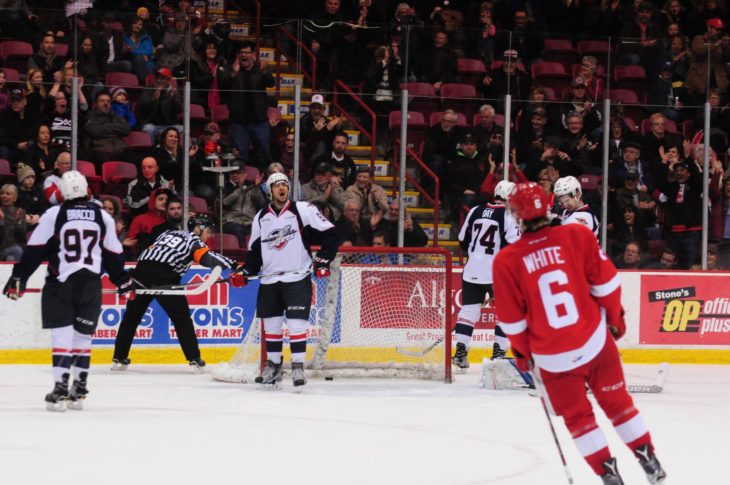