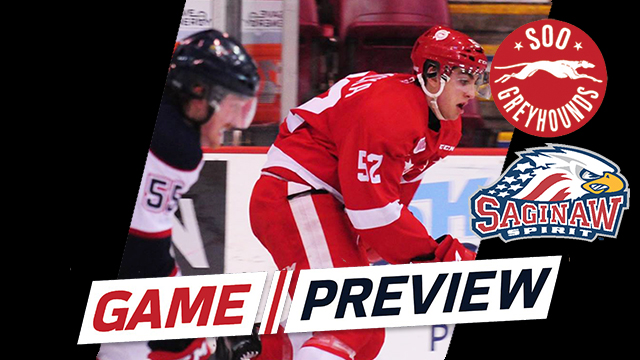 For the second time in forty-eight hours the I-75 rivalry between the Greyhounds and Spirit takes to the ice TONIGHT (7:07 PM).
The game is right here in Sault Ste. Marie at the Essar Centre.

It was back on Wednesday evening the single-goal victory by Saginaw (2-1) pushed them past the Greyhounds for just the second time in seven games against the Hounds.
And while it was the lowest scoring match-up between the two teams, the Greyhounds continue to hold a 23 to 18 (GF/GA) differential against their West Division opponent.

This will be the second last game of the regular season for both teams.  The Hounds return to action on Sunday afternoon (2 PM) against London while Saginaw returns home tomorrow to end their year against the Windsor Spitfires.

Let’s take a look at some of the news, notes and storylines surrounding tonight’s match-up.

This game is proudly presented by

HEAD-TO-HEAD
This is the final meeting of the 2016-17 season between the Hounds and Spirit.

The Hounds have won five in the season-series while Saginaw has won a pair.

Here’s how the seven previous meetings have went;

L 1-2, Mar. 15 @ SAG
After an hour delay due to ice conditions, the Hounds and Spirit skated through a scoreless opening period;  Filip Hronek opened the scoring with the only second period goal during a period Saginaw outshot the Hounds 18-7;  Morgan Frost’s powerplay goal in the third tied the game before Hayden Hodgson scored the game-winner for the Spirit;  Hounds were 1-for-2 on PP and 4-for-4 on PK
(Boxscore)

W 3-1, Feb. 8 @ SSM
After a scoreless first period, Jack Kopacka gave the Hounds a 1-0 lead 0:53 into the second period;  Max Grondin tied the game sending into the third period deadlocked;  Zach Senyshyn and Jack Kopacka with his 2nd of the night, less than two minutes apart, scored the remaining goals in the Hounds win;  Hounds were 1-for-4 on the power play
(Boxscore)

W 5-2, Feb. 1 @ SAG
Saginaw opened the scoring in the opening minute before Bobby MacIntyre pulled the Hounds;  Hounds had the only two goals of the second period (Miller, Frost) along with holding Saginaw to just 4 shots on goal;  MacIntyre, Speers scored in third period as Hounds skated to win;  MacIntyre with 3 pt night (2g, 1a) along with being named Red Star 1st Star
(Boxscore)

W 5-3, Dec. 16 @ SSM
After scoreless first period, Hounds scored 4 goals in the second period to take that lead into the third period, thanks to goals by Katchouk, Hayton, Gettinger and Hawel;  Hounds held Saginaw to just 20 shots
(Boxscore)

100-POINT PLATEAU
With two wins this weekend, the Soo Greyhounds would hit the 100-point plateau for just the third time in franchise history.

The North Olmsted, OH product was selected by New York in the 5th Round of the 2016 NHL Entry Draft.

TWO TO GO FOR SPIRIT
Despite their victory over the Greyhounds on Wednesday Night, the Saginaw Spirit were eliminated from the 2017 Playoffs by virtue of a Sarnia win over Windsor (4-2).

It snaps an 11-year playoff streak (third longest in the OHL) by Saginaw.

Tomorrow the Spirit will end their season by hosting the Windsor Spitfires at the Dow Event Center in Saginaw.

Through the various categories there was eight that featured members of the Greyhounds (6) and Sprit (2).

BE A PART OF THE ACTION!
Great seats for tonight’s game still remain.

Fans can purchase their tickets by visiting the Essar Centre Box Office, ordering online at www.essarcentre.ca or by phone at 1.866.775.9422.

Don’t forget if you’re purchasing in-person at the Box Office you can take advantage of the “March Family Pack” that includes 4 tickets (2 adult, 2 child), 4 hot dogs and 4 pop for just $67!

DO YOU HAVE YOUR PLAYOFF TICKETS?
Tickets for Game 1 & 2 of the opening round of the 2017 OHL Playoffs are on-sale NOW to both season ticket holders and the general public.

Opponent and dates are TO BE ANNOUNCED.

You can secure your seat for the playoff run by visiting the Essar Centre Box Office during regular business hours of 10 AM to 5:30 PM Monday to Friday, 10 AM to 2 PM on Saturday or online at www.essarcentre.ca or by phone at 1.866.775.9422.

Questions?  Contact the Greyhounds Manager of Ticket Sales Matt Rodell by phone at 705.574.0090 or by e-mail matt@soogreyhounds.com 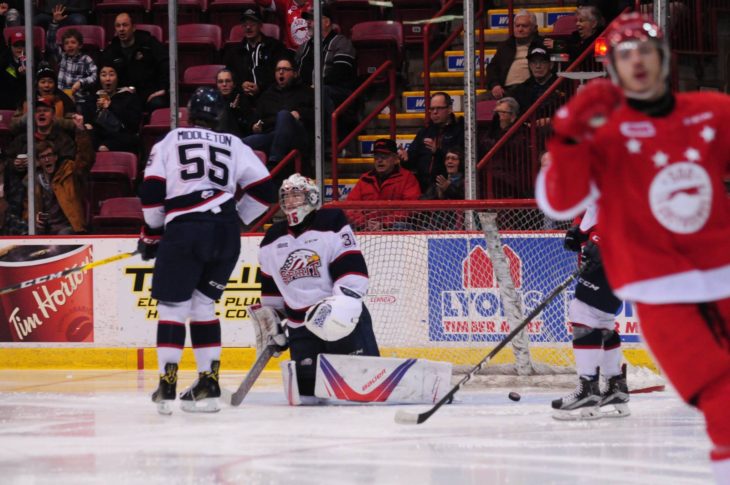