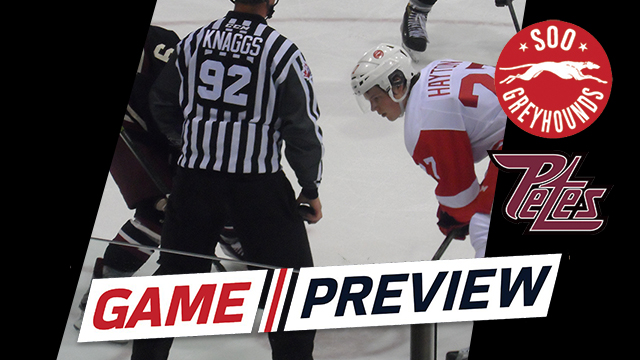 It will be the second game in as many days for both clubs.

While the Hounds began their quick two-game home stand with a win (4-1) versus Windsor last night, Peterborough began their trek to Northern Ontario with an overtime win in Sudbury (5-4) last night.

Game time is 7:07 PM and is proudly presented by Wawanesa Insurance.

HEAD-TO-HEAD
Tonight is the second-and-final regular season meeting between the Greyhounds and Petes.

It was only the 8th game of the season for the Hounds when they opened up their long Eastern Ontario road trip in Peterborough.

Here’s how that October meeting went;

SOW 5-4 Oct. 13 @ PBO
Peterborough scored first and then later had a 2-1 first period lead before Hounds took the 3-1 lead thanks to goals by Kopacka, Martin and Hawel;  After two goals by PBO in third, a goal with 1:30 to go by Boris Katchouk extended the game past regulation time;  Shootout went 5 rounds before Otto Makinen grabbed the game-winner;  Teams combined for 94 shots on goal (49 SSM – 45 PBO)
(Boxscore)

NETWORTH
The #1 masked men for the Hounds and Petes enter Saturday night with very similar numbers.

Both are in their 3rd season in the OHL.

To-date, the Hounds are 15-3-1-0 versus the Eastern Conference while holding a perfect 9-0-0-0 record when meeting the East Division.

Peterborough is 5-7-1-3 against the Western Conference and 2-3-1-3 in West Division match-ups alone.

TEN-IN-A-ROW
As they have ascended to the upper echelon of their division and conference standings, a ten game winning streak has played a significant role for both the Hounds and Petes.

The Greyhounds streak extended from November 12 to December 10, and during that period they outscored their opposition 53 to 23.
It began with a win against Erie and stopped in Erie.

Peterborough entered and exited the holiday break amidst their winning streak, starting on December 1st (@ Guelph) before ending on January 1st (vs Hamilton).
The Petes outscored their opposition 44 to 26 during that span.
It was their best first-half of the season in 11 years.

A FAMILIAR NAME RETURNS
Now in his 5th season (overage year) in the Ontario Hockey League, Petes defenceman Kyle Jenkins makes his final regular season appearance in the town where his career began.

Originally drafted in the 4th Round of the 2012 OHL Priority Selection, the Brampton ON product was traded to the Petes 38 games into the 2014-15 season.

Now an overage with the Petes, Jenkins is on pace for a career year in the burgundy and white.
After back-to-back 36 point campaigns, Jenkins has 9 goals and 21 assists (30 points) in 44 games played this season.

He is 8th overall in Peterborough scoring.

TICKETS
Great seats remain for this Saturday match-up by visiting the Essar Centre Box Office (starting at 10 AM), ordering online at www.essarcentre.ca or by calling 1.866.775.9422. 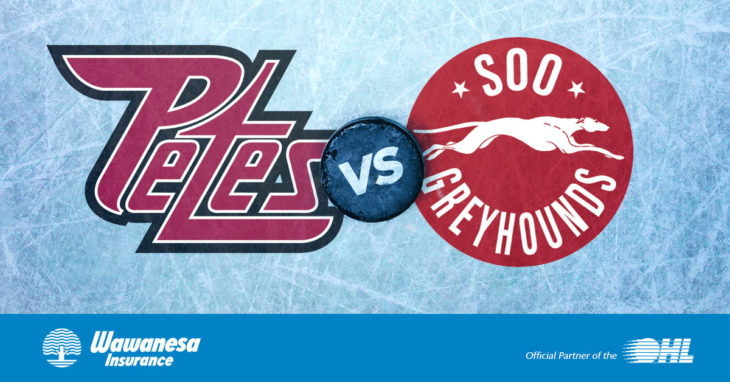