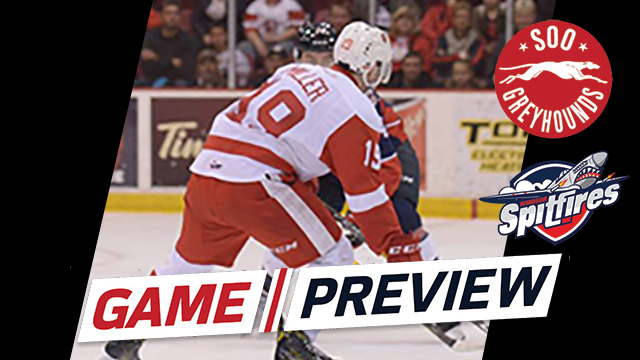 That’s the scenario this evening when the Hounds host the Windsor Spitfires in Sault Ste. Marie for the final time of the regular season.
It’s a battle for first place in the OHL’s West Division.

Game time is 7:07 PM and is proudly presented by Algoma University.

HEAD-TO-HEAD
Tonight is the fifth (of six) regular season match-ups between the West Division rivals.
They will meet again on Thursday, March 2 at the WFCU Centre in Windsor.

Thus far the teams have split the season series with each team winning once on home ice, and once on the road.

Here’s how the previous four meetings have went;

W 4-1 Nov. 30 @ SSM
Teams were tied 1-1 after the first period before skating through most of the second period scoreless;  Two late goals by the Hounds (16:42 by Miller, 18:15 by MacIntyre) provided the Hounds a 3-1 advantage;  Boris Katchouk rounded out scoring 0:23 into the third period;  Joseph Raaymakers made 35 saves on 36 shots faced while being named the Red Star Third Star of the Game
(Boxscore)

L 2-5; Oct. 27 @WSR
Windsor jumped out to a 2-0 lead by the 8:22 mark of the first period;  After Tim Gettinger and Morgan Frost scored to tie the game in the second period Windsor responded just 39 seconds later to regain the lead;  Two additional goals, including an empty netter, provided Windsor the 5-2 advantage;  Both teams scored once on PP
(Boxscore)

W 3-1;  Sept 29 @WSR
The Hounds never trailed in the game as Bobby MacIntyre in the first period and Barrett Hayton with his 1st OHL goal in the second had the Hounds leading 2-0 through forty minutes;  Cole Purboo put Windsor on the board before David Miller sealed an empty goal in the win;
(Boxscore)

L 2-5;  Sept 23 @ SSM
Single goals in both the first and second periods (Frost, Hawel) had the Hounds with a two goal cushion after two periods;  Windsor tied the game with two goals less than a minute apart in the third while reeling off 5 unanswered goals for the win;  Windsor had 2PPG;  Sooite Mario Culina 24 saves in win.
(Boxscore)

GREAT SEATS AVAILABLE
You won’t want to miss this action!  Bring your family and friends to this Friday Night showdown.

ON THE MEND
A trio of Windsor veterans are expected to be sidelined tonight, and into the future with respective injuries.

As released by Windsor GM Warren Rychel earlier this week, Jeremiah Addison is out with a bruised lung, Logan Brown has a right hand injury and Logan Stanley recently had injury to repair a torn meniscus in his right knee.

BY THE NUMBERS
• The Greyhounds enter the game with 67 points, that’s two more than Windsor’s 65 for first in the OHL’s West Division (Windsor holds a game-in-hand)
By virtue of the division lead, the Hounds are presently seeded 2nd in the OHL’s Western Conference while Windsor enter’s tonight in 4th.

• Including tonight, the Hounds have 14 home games and 8 road games remaining in the regular season;  Windsor will play 13 at the WFCU Centre and 10 on opposition ice.

WHATS THE DIFFERENCE?
With tonight being the first meeting between the two teams since November 30th, the opposition will have a different look.

In particular, Windsor made a number of deals heading into the OHL trade deadline earlier this month;
• Jan. 10; Acquired D Daniel Robertson from OSH for 3rd/24 and Adam Laishram and 2nd/17 and 8th/17 for two seconds and a 4th

Greyhounds MORGAN FROST and CONOR TIMMINS along with Spitfires’ Michael DiPietro and Gabriel Vilardi are among the 40 participants in this year’s event.

The game is is this coming Monday, January 30 (7 PM) in Quebec City.

The Hounds duo along with DiPietro will participate for Team Orr while Vilardi will suit up for Team Cherry.

TOP 10 RECOGNITION
Both the Greyhounds and Spitfires were recognized in the latest CHL Top 10 rankings released earlier this week.

The Hounds dropped to the #4 spot, while Windsor entered the standings sitting in the 8th position. 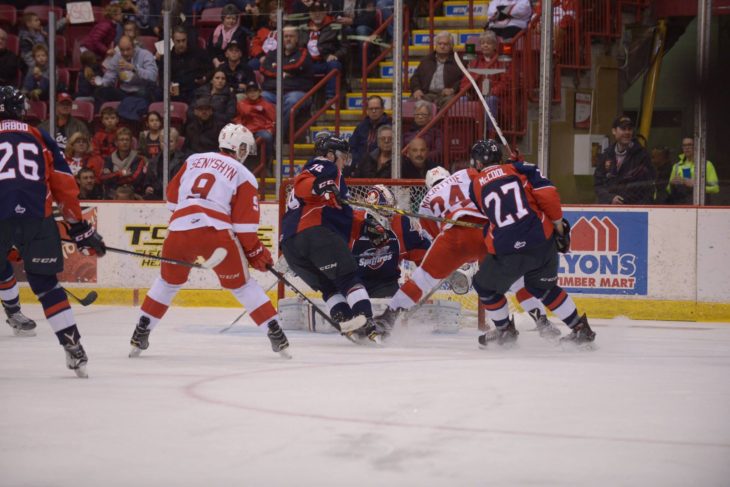