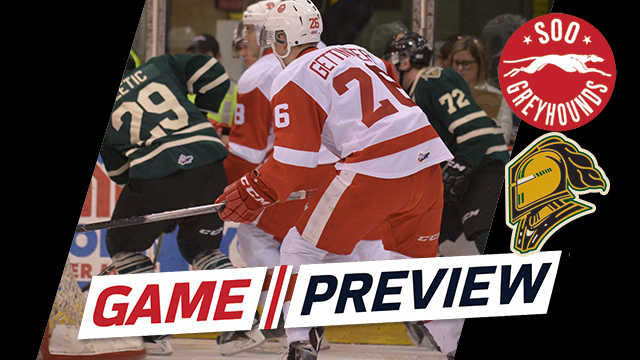 A Sunday afternoon matinee (2:07 PM) showcases a marquee match-up in the Ontario Hockey League today as the Hounds host the London Knights for the first time this season.

60 MINUTES HASN’T BEEN ENOUGH
For the first time in 14 seasons the Soo Greyhounds have skated out of London with a pair of wins against the Knights earlier this year.

But while the locals have a 2-0 lead in the head-to-head season series, neither game has been decided in regulation time.

In their most recent match-up (Oct. 28) the Hounds led after the first period thanks to goals by GUSTAV BOURAMMAN and MORGAN FROST.  With a 3-2 lead after two periods of play the Hounds saw London tie the game midway through the third period forcing the two clubs to overtime for the second straight game.

It was just 39 seconds into the extra session that BORIS KATCHOUK ended the contest in a 4-3 Greyhounds victory.
GAME STORY  |  HIGHLIGHTS  |  BOXSCORE

While they initially met for the Hounds 4th goal of the season back on September 30, and after London opened the scoring it was BOBBY MACINTYRE tying the game with just 15 seconds left in the first period.

London would score the only second period goal before MORGAN FROST notched a tally just 0:52 seconds into the third period in a contest that eventually went to a shootout.
There JACK KOPACKA and GUSTAV BOURAMMAN (GWG) scored in the Hounds 3-2 win.

TWO OF THE TOP 10
The Greyhounds and Knights are among two of the CHL’s Top 10 teams in the rankings released earlier this week.

The Week 16 rankings saw London sitting in the #2 position behind the WHL’s Regina Pats while the Hounds sat in 4th position (separated between them and the Knights by the Everett Silvertips).

London has been ranked for 15 weeks this season, while the Hounds have been recognized during six weeks.

MAKE IT FOUR-IN-A-ROW
TIM GETTINGER moved into third on team scoring with his 21st goal of the season back on Friday Night.

PROSPECT WATCH
Four players in this afternoon’s game will look to raise their stocks for the 2017 NHL Entry Draft when they compete in the Sherwin-Williams Top Prospects Game January 30th in the brand new Centre Videotron in Quebec City.

MORGAN FROST and CONOR TIMMINS will represent the Greyhounds while Robert Thomas and Alex Formenton head east for the Knights.

JOINING THE KNIGHTS ARMOUR
GM Rob Simpson made a pair of deals in advance of this past Tuesday’s OHL trade deadline.

In a deal with the Saginaw Spirit, London acquired the Tampa Bay Lightning prospect Mitchell Stephens in exchange of four 2nd Round picks and three third round picks.

DON’T MISS THE DIVISION LEADERS GOING HEAD-TO-HEAD
Great seats are still available by stopping by the Essar Centre Box Office (open at 10 AM) or by ordering online at www.essarcentre.ca or by phone at 1.866.775.9422.

Questions regarding any ticket issue can be directed to the Hounds Manager, Ticket Sales Matt Rodell by phone at 705-574-0090 or e-mail matt@soogreyhounds.com.

RADIO/TV
Fan’s can catch all the action on both RADIO and TV.

The Rock 101 pre-game show with Gerry Liscumb Jr. begins starting at 1:37 PM.  You can hear the action by tuning your FM dial to 101.3 or listen online HERE.

Additionally, ShawTV will be live starting at 2 PM. 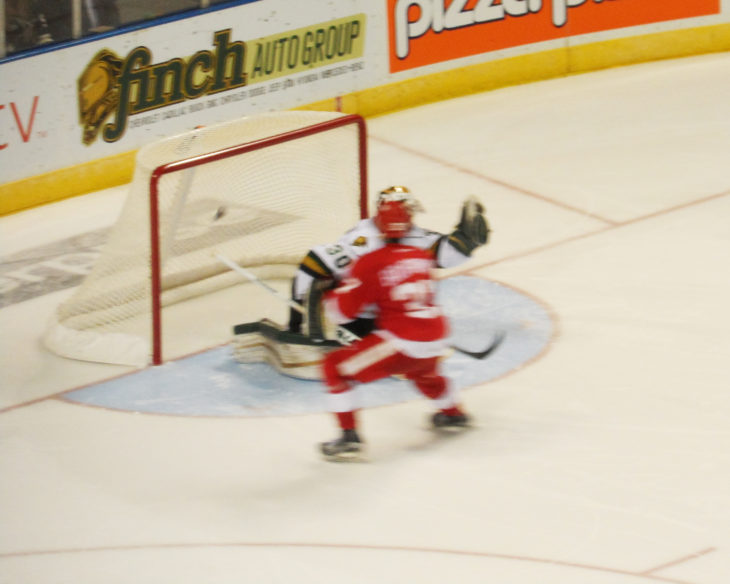 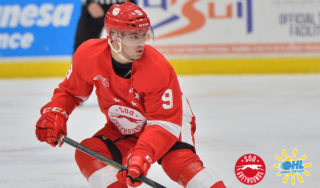