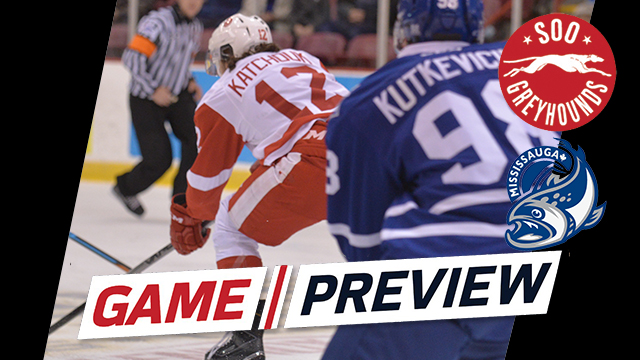 For just the second time in the last three weeks, the Soo Greyhounds are returning to the Essar Centre ice, to kick off a three-game home stand TONIGHT.

The club is coming off a Wednesday evening victory at Sudbury, where DAVID MILLER scored the overtime winning goal, his 15th goal of the year, 3:25 into the extra session.

For Mississauga, this is their one-and-only regular season visit to Sault Ste. Marie.
They enter the contest unbeaten in their last 6 games (5-0-1-0) while taking sole possession of 1st place in the Central Division.
After starting their Northern Ontario swing last night in North Bay (W 2-1), they will continue to Sudbury for a Sunday afternoon matinee.

HOUNDS MAKING THEIR HOME ICE DEBUT
For Captain BLAKE SPEERS, and the newest Hound NOAH CARROLL, tonight marks their first game this season in front of the hometown crowd.

After beginning the year with the New Jersey Devils, Speers was injured in his first game with the Hounds back on October 27th.  After his hard work through the injury, he then participated at the World Junior Hockey Championship for Team Canada before returning to the Hounds last Saturday Night.

Blake and Mississauga Steelheads Michael McLeod and Vili Saarijarvi will be recognized prior to the game for their participation at the World Junior Hockey Championship.

Carroll made his debut one week ago (Jan. 6 @KIT) after being acquired from the Guelph Storm.  The 19-year old defenceman has a 2 pts in 3gp since becoming a member of the Hounds.

HEAD-TO-HEAD SEASON SERIES
Tonight is the second and final regular season meeting this year between the Hounds and Steelheads.

Back on November 25 (@ Hershey Centre, Mississauga ON) the two teams skated through a scoreless first period before Brandon Harrogate scored twice in the second as Mississauga skated into the dressing room with a 3-1 lead after forty minutes.

The Hounds would rebound in the third period scoring four unanswered goals including the game-winner by BOBBY MACINTYRE for the 5-3 win.
OHL BOXSCORE  |  GAME STORY

The Hounds have been paced by a 20-4-0-0 road record, while they have strung together an equally impressive 20-4-1-0 record since the start of November.

TIMMY G LIGHTING THE LAMP
Over the last month third-year forward TIM GETTINGER has been producing offense at a pace of over a point-per-game.

While he enter’s tonight on a three-game goal scoring streak, the North Olmsted OH product has 9 goals and 6 assists in his last 10 games played.

He is joined by Boris Katchouk and Zach Senyshyn to hit the 20-goal plateau so far this season.

HOME SWEET HOME
The Hounds now have points in 9 consecutive games at home.
Dating back to November 12, 2016, the club is 8-0-1-0 at home while outscoring their opposition 41 to 19.

JOINING THE TROUT
Mississauga made a pair of acquisitions heading into Tuesday’s OHL Trade Deadline.
•  Acquired Trent Fox from Hamilton for a 5th/17,  4th/19 and 3rd/20
•  Acquired F Jacob Cascagnette from Kitchener for 3rd/20 and conditional 4th/20.

GREAT SEATS ARE STILL AVAILABLE
Want to be part of the action live?  Great seats are still available by stopping by the Essar Centre Box Office (open at 10 AM) or by ordering online at www.essarcentre.ca or by phone at 1.866.775.9422.

Questions regarding any ticket issue can be directed to the Hounds Manager, Ticket Sales Matt Rodell by phone at 705-574-0090 or e-mail matt@soogreyhounds.com.

RADIO/TV
Fan’s can catch all the action on both RADIO and TV.

The Rock 101 pre-game show with Gerry Liscumb Jr. begins starting at 6:37 PM.  You can hear the action by tuning your FM dial to 101.3 or listen online HERE.

Additionally, ShawTV will be live starting at 7 PM.