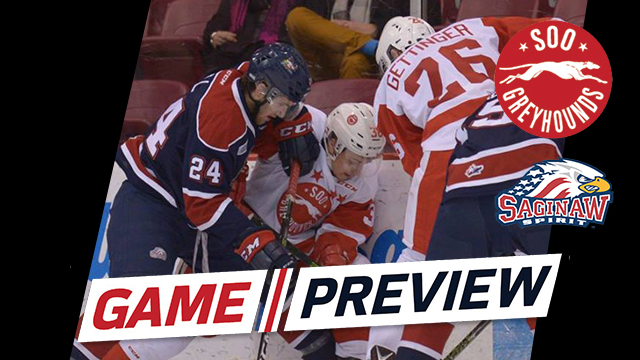 It may have been a roller-coaster start to 2017, but tonight the calendar rolls over to a new month and a new week of Ontario Hockey League action.

Starting off a string of three straight games on the road, the Hounds make the trip down Interstate 75 and into Mid-Michigan against the Saginaw Spirit.

Game time is listed as 7 PM but due to pre-game festivities expected puck drop is 7:30 PM.

The Saginaw Spirit will be making it’s first jersey retirement in the 15 years anniversary of the franchise (more below).

HEAD-TO-HEAD
It’s the fifth (of eight) meetings this regular season between the two clubs.

The Greyhounds have won three-in-a-row against Saginaw, all separated by 2 goals or less.

W 5-3, Dec. 16 @ SSM
After scoreless first period, Hounds scored 4 goals in the second period to take that lead into the third period, thanks to goals by Katchouk, Hayton, Gettinger and Hawel;  Hounds held Saginaw to just 20 shots
(Boxscore)

ONE IN, ONE OUT
The Greyhounds are solidly positioned in the Western Conference playoff picture while among a serious fight at the top of the standings.

By virtue of the West Division lead, the Hounds are 2nd in the conference but part of five teams separated by five points;  Erie 71,  SSM 69,  London 71, Windsor 67 and Owen Sound 66.

On the other side, the Saginaw Spirit have closed the gap on themselves and the Flint Firebirds for the 8th and final playoff position to 2 points.
Following tonight Flint will have two games in-hand heading into the final 20+ games of the regular season remaining.

SHOWCASING THEIR TALENTS
Back on Monday evening the Hounds duo of MORGAN FROST and CONOR TIMMINS competed at the 2017 Sherwin-Williams Top Prospects Game in Quebec City.

Along with finishing the marquee game with 1 assist, +1 rating, 2 shots on goal and going 8-for-14 in the faceoff circle, Frost finished 2nd in the on-ice sport testing the previous day.
For Timmins, he capped off the contest with a +1 rating and 1 shot on goal

WHAT’S DIFFERENT?
Since it’s been over a month since the last time these two teams met there are a few changes with the Saginaw roster since that late December night.

Gone is former captain Mitchell Stephens.  Now with the Spirit is Hayden Davis (from NIagara)

RAISING IT TO THE RAFTERS
Tonight the Saginaw Spirit will retire the first number to the rafters of the Dow Event Center, all part of their 15-year anniversary celebration.

The honouree will be #89 Vincent Trocheck.

Trocheck, a Pittsburgh PA native, is now in his 4th season with the NHL’s Florida Panthers.

RADIO/TV
The Rock 101 pre-game show with Gerry Liscumb Jr. begins starting at 7:00 PM.  You can hear the action by tuning your FM dial to 101.3 or listen online HERE 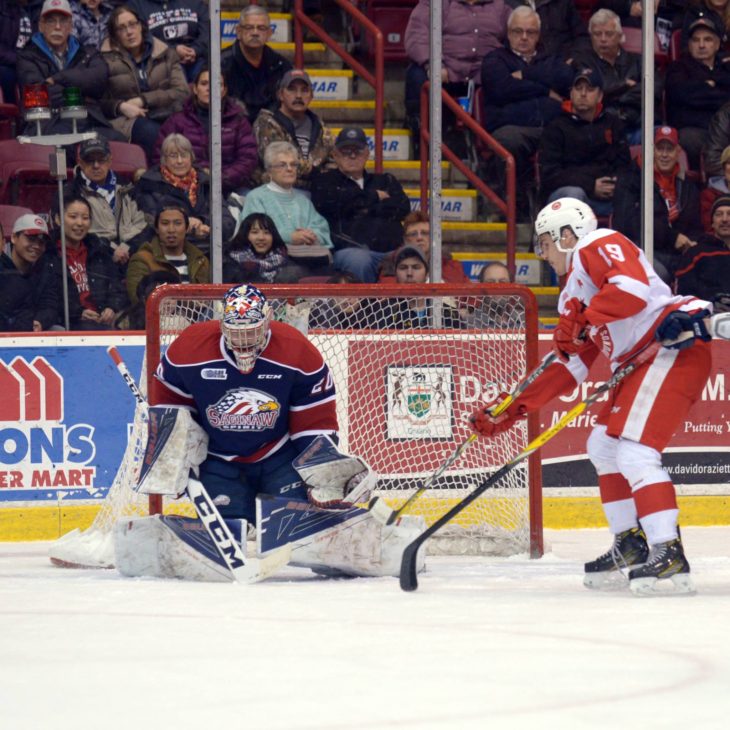