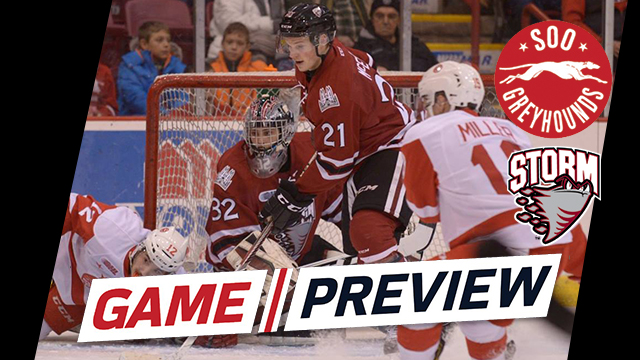 Tonight is Game #2 for the Soo Greyhounds during their current 8-game home stand (#TheHOMESTAND).

Thanks to a 3-1 win on Wednesday evening over Saginaw (STORY: Kopacka scores twice, Villalta near perfect as Hounds start #TheHOMESTAND with win) the Hounds enter tonight with back-to-back victories.

It’s the first time in over a month that the club has strung consecutive wins together.

Meanwhile Guelph started off their Northern Ontario road trip with a victory in North Bay one night ago thus extending their unbeaten streak to a pair of games (1-0-1-0).

Game is proudly presented by

HEAD-TO-HEAD
It’s been over a month since the Hounds and Storm met during a New Year’s matinee in Sault Ste. Marie.

Following tonight the four-game season series will have one final game remaining between the two clubs as part of the Hounds final extended roadtrip of the regular season.

Here’s a look at the two games so far:

SOW 3-2, Dec. 31 @ SSM
The Greyhounds held leads on two separate occasions before sitting tied 1-1 after the first period (Senyshyn) and 2-2 after the second period (Hawel);  After overtime solved nothing, The game would go just three rounds of a shootout and the only goal was scored by Otto Makinen (GWG);  Hounds were 1-for-6 on PP and 4-for-4 on PK
(Boxscore)

LIGHTING THE LAMP FOR THE 3RD STRAIGHT
JACK KOPACKA extended his goal-scoring streak to 3 games thanks to a pair of goals back on Wednesday evening.

The Metamora, MI product now has 4 goals in his last 3 games, while surpassing his rookie season output of 20 goals one season ago.  He now has 21 goals and 12 assists (33 points) on the season.

SINCE THE SWITCH
Back on January 6 the Hounds and Storm were involved in a trade that saw players (NOAH CARROLL – Liam Hawel) and picks exchanged between the two Western Conference clubs.

Since the deal CARROLL has put together 2 goals and 3 assists (5 points) in 14 games played on the Greyhounds blueline.

While Hawel has appeared in 13 games with the Storm while grabbing 1 goal and 5 assists (6 points).

HIGHS AND LOWS
Looking at some of the numbers across the OHL, the Greyhounds and Storm are at opposite ends of the spectrum this season.

• PIM;  With 521 penalty minutes, the Hounds are the 4th least penalized team while the Storm is the 4th most-peanalized (671)

• POSITION;  The Hounds currently hold the 2nd seed in the Western Conference while Guelph sits 10th.

Makkonen (9th Rd, 2015) has suited up in 10 games while accumulating 1 goal and 2 assists.  He recorded his first-career OHL goal on January 22, 2016 Windsor.
He joined Guelph after starting the season with the NOJHL’s Soo Eagles where he appeared in 31 games.

ShawTV will be live with the television broadcast at 7 PM. 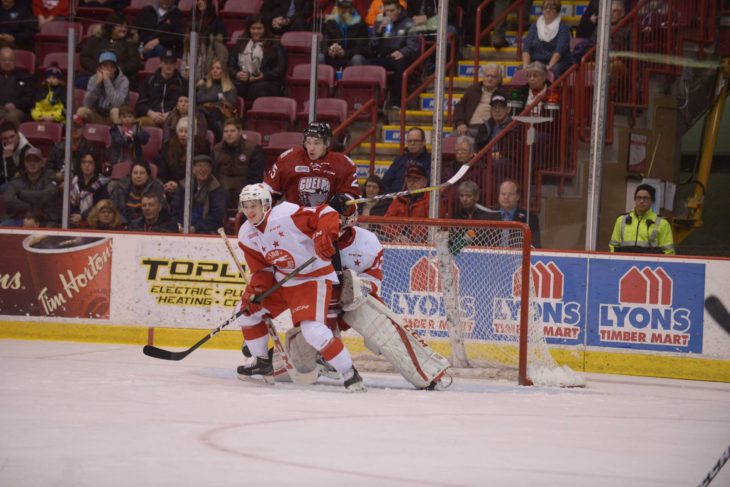 Q&A with Nolan Dunn
16 hours ago